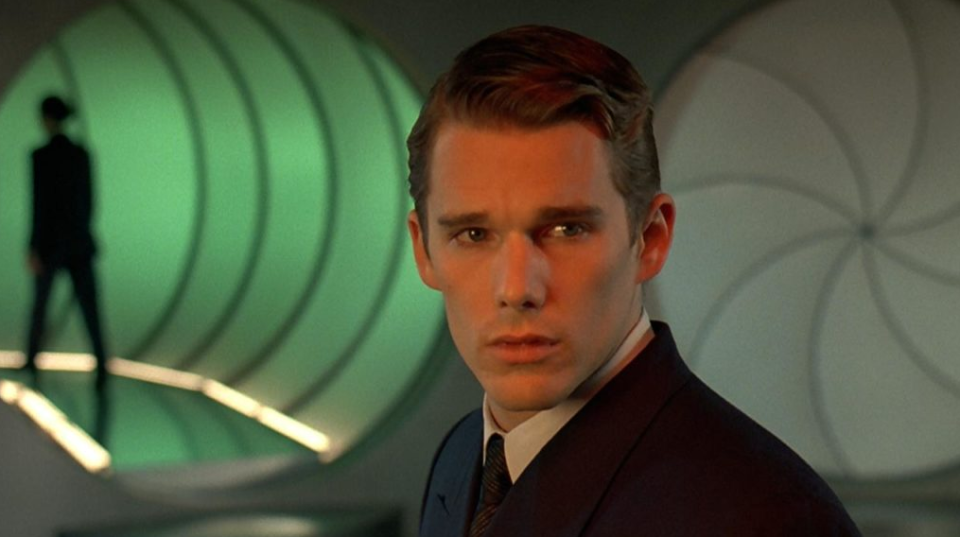 Some of the most memorable films focus on a protagonist that is an underdog. We love to root for a main character that has to overcome seemingly insurmountable odds to accomplish their goal. Movies set within an Orwellian dystopian atmosphere are the perfect place to find such heroes. Vincent Freeman (Ethan Hawke) in Andrew Niccol’s 1997 science fiction thriller Gattaca is a guy you definitely want to see succeed. In fact, Freeman’s story arc is so intriguing that an argument could be made that he’s a more compelling and interesting character than Orwell’s own Winston Smith in the prescient and standard-bearer for all things dystopia,1984. George Orwell’s masterpiece is a seminal commentary on totalitarian oppression and is widely regarded as one of the finest stories ever told. His main character, however, is another story. Freeman is a far more layered and complex individual than the somewhat naive and vulnerable Smith, who at times seems to be little more than a passenger as opposed to an engaging protagonist.

In Gattaca, Vincent Freeman was an underdog before he even took his first breath. Born into a futuristic society that allows for genetic engineering, those who have been tweaked and tinkered with in utero and made with the best parts of their parents’ DNA are considered superior specimens. Those born naturally are labeled as, “invalids” and subjugated as second class citizens while being relegated to a lower status. As such, Vincent works odd jobs waxing floors and cleaning toilets biding his time and dreaming of venturing into space.

His chances of achieving this lifelong dream are seemingly well out of reach. Only “valids” are considered for the space program. While Orwell’s Winston Smith strives for little, questions less, and ultimately accomplishes nothing, Vincent is determined to somehow achieve the unachievable. His passion to overcome the bad hand he’s been dealt takes him on a daunting and enthralling hero’s journey. The result is fascinating account of one man’s indefatigable efforts to buck the system and subvert a totalitarian regime designed to suppress what it considers lesser beings. As Vincent notes, it is a world that literally has “discrimination down to a science.”

Stylish Contours in a Dystopian World
Niccol’s stylish, sleek contours and resplendent, serpentine facades serve as the backdrop for a not-too-distant future society within which Vincent is determined to maneuver over and around a rigged system. He’ll do whatever is necessary, and what’s necessary is both extensive and expensive. Winston Smith muddled about clumsily, disillusioned with the idea that there was anything he could do to change his circumstance. Vincent goes to extreme measures to alter his. The only thing that he has working in his favor is his determination and the fact that “there is no genetic code for fate.” Born with such “natural” shortcomings like myopia and a 99% chance of chronic heart failure by the age of 30, he has precious little time to waste.

To pull it off, Vincent must change his identity and become Jerome “Eugene” Morrow (Jude Law) who he meets via an unscrupulous DNA peddler (Tony Shalhoub) after he has suffered a debilitating broken back that has left him paralyzed from the waist down. For a hefty fee, Vincent can become Eugene. He has everything that Vincent was born without from “valid” blood (which he meticulously pools underneath tiny, wax-crafted fingertip fitted sachets to pass random DNA samples) to pre-recorded heart rates to cover his genetic defect. He even carries with him the necessary discarded hair dander and skin cells from Eugene so that he can use them as breadcrumbs of authenticity should anyone get wise to his identity.

Heartstopping Entertainment Ensues
The subterfuge that Vincent must engage in just to pass as a regular “valid” is tedious, making his everyday interactions with fellow, genuinely genetically engineered space training students and faculty taut with a psychological uneasiness. It also makes for marvelous, edge-of-your-seat entertainment. Unlike Winston Smith in 1984, Gattaca’s protagonist is proactive and hyper-vigilant leaving nothing to chance. That doesn’t necessarily mean that he is perfect, however. And like Orwell’s main character, Vincent has brushes with the rigid, iron-fisted authorities.

When the mission director at Gattaca Aerospace Corporation is mysteriously murdered, it brings unwanted extra attention from the police (Alan Arkin, Loren Dean). Though he feverishly scrubs his body clean of as many loose skin cells and hairs, and clips his fingernails daily, when fellow student Irene Cassini (Uma Thurman) discovers a single “invalid” eyelash, Vincent must take his ruse to another level. He quite literally risks his life in order to keep both the gambit afloat and pursue a relationship with Irene. In this regard, he is similar to Smith in that his carnal desire becomes a weakness that threatens to expose him to the authorities. Perhaps if Smith had been as diligent as Freeman, he would have met a different fate. And though Irene nearly proves to be Vincent’s undoing, and he is forced to reveal himself to her, she has empathy for him and his journey. The fact that he has overcome such unimaginable odds to get to where he is wins her over. Freeman has once again succeeded clearing a difficult hurdle where the careless and less savvy Smith did not.

Nonetheless, having the cops sniffing around is cause for concern with the mission to Saturn’s moon, Titan, only a few days away. When the twist revealing one of the detectives pursuing the owner of the “invalid” eyelash is Vincent’s eugenically “valid” younger brother, Anton, it appears the dream is over. But by proving his merit yet again in a swimming competition they used to compete in as kids. Anton is inclined to admit that what his younger brother lacks in specialized genetic coding, he more than makes up for it in immeasurables like heart and an unyielding desire to succeed.

Utilizing Smith as an archetype, Freeman is an improvement on dystopian protagonists and Hawke’s performance is what propels the movie to such a lofty status. When the film adaptation of 1984 was released in the titular year, it suffered not only by comparison to the novel, but also in the simplistic and dull manner in which the main character is effected by overwhelming circumstance. So much so that even master thespian John Hurt couldn’t bring nuance to the role of Winston Smith. Make no mistake, Orwell didn’t miss a thing when he penned 1984, his protagonist served the purpose he intended, but Freeman’s extra dimensions and overarching emotional journey make him a dynamic main character by comparison.