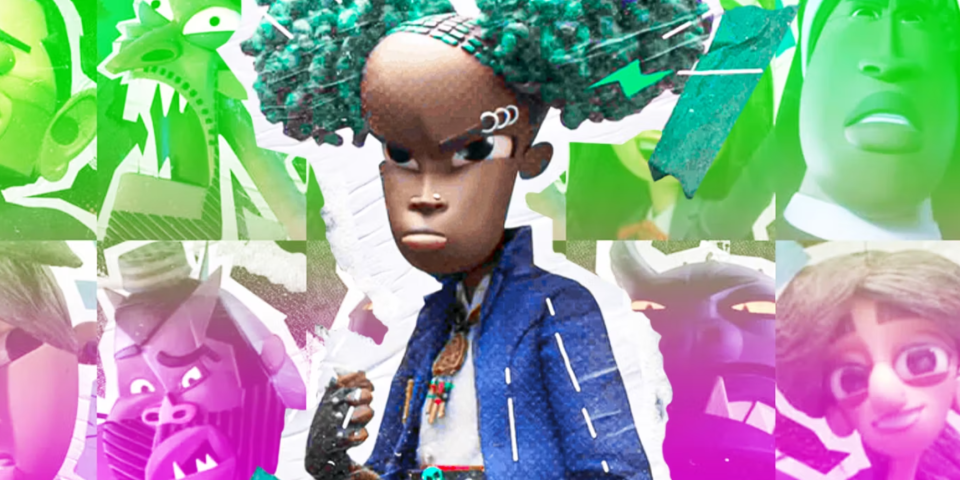 In Wendell and Wild, comedy duo Keegan-Michael Key and Jordan Peele reunite to voice two demon brothers who are attempting to escape the underworld. The stop-motion movie, which arrived in theaters on October 21 and will be released on Netflix on October 28, is a spooky mix of ideas and inspiration from Peele and The Nightmare Before Christmas and Coraline director Henry Selick. Together the two have created a PG-13 dark comedy just in time for Halloween that features stompy afro-punk tunes, a subplot about the prison system, diverse representation, and a killer cast portraying original, hilarious characters.

If you’re on a green shadow journey of your own to find out more about the cast and characters of this spectacular and spooky film, then let this article be your guiding light, and try not to let any of your own demons loose along the way.

Keegan-Michael Key as Wendell and Jordan Peele as Wild
Demon brothers Wendell and Wild are trapped in an underworld prison, sentenced to live atop the scalp of the dark and terrible lord of the underworld, Buffalo Belzer. Through scheming, devious planning, and snacking on hallucinogenic hair gel, Wendell and Wild attempt to escape and enter the human realm with the help of an unsuspecting girl named Kat. Not very threatening but full of chaos and devious fun, the brothers go from haunting Kat’s dreams to terrorizing her hometown, hoping to turn it into an undead amusement park. After striking a deal with the orphan, these two are troublesome at best. As they enrich their lives with silly and devilish crimes, they might just end up doing a good deed or two along the way.

Keegan-Michael Key and Jordan Peele’s riffing is unrivaled and possibly the biggest draw of the movie. Since their show Key and Peele ended in 2015, the duo have gone on to have successful careers separately, though with a few collaborative projects now and then. Keegan-Michael Key recently appeared in the 2022 comedy film The Bubble, portraying an overzealous actor filming while in quarantine from Covid-19. Most recently, the Keanu actor took on the character of Reed Sterling in the comedy series Reboot, where he plays a member of a dysfunctional family sitcom cast. While taking on voice acting roles in recent years, Jordan Peele has built quite a career behind the camera. Known for his mind-bending horror films Get Out and Us, Peele’s most recent endeavor was into the realm of aliens with his sci-fi horror mystery Nope. The horror genius teaming up with the masterful stop-motion creator is a dream come true for Peele’s fans. Henry Selick talked about collaborating with Peele in a conversation with Collider’s Steve Weintraub and said that “so many of his ideas were fresh and better and I embraced them”. Check out the full interview below.

Lyric Ross as Kat
Kat is a young goth orphan with a traumatic past who possesses a peculiar, supernatural gift: the ability to see and communicate with her personal demons. Kat, curious and driven, was recently moved from juvie to the crumbling and creepy Catholic school where most of the story takes place. With the help of one of the school’s nuns, Kat learns that she must make peace with the events that led to her parents’ deaths, as well as the flaws that bind her to her demons. Wrapped in an oversized hoodie with her stereo in hand, Kat sets out on a journey of self0discovery as a Hellmaiden, while attempting to save her home from the demons she herself summoned.

Angela Bassett as Sister Helly
Through a green-lit shadow journey, Sister Helly helps Kat face her demons. The stern yet sympathetic arch nemesis of brothers Wendell and Wild, Sister Helly may find that she has to team up with the dastardly demonic duo in order to stop something even more horrible from taking over.

Known for her roles in the 90s films Strange Days and Contact, as well as embodying an alluring modern version of herbalist Marie Laveau in American Horror Story, Marvel fans will recognize Angela Bassett as the elegant and powerful Queen Ramonda from Black Panther. With the sequel, Black Panther: Wakanda Forever currently gearing up to arrive in theaters, fans are surely looking forward to seeing the queen on the screen once again. Until then, audiences will get to hear Bassett as she lends her voice to the demon-dusting character Sister Helly. Her role in Wendell and Wild is not the Olympus Has Fallen actress’s first foray into voice acting, having previously brought characters to life in the Transformers film Bumblebee, as well as BoJack Horseman and The Simpsons.

James Hong as Father Bests
Father Bests is an unsuspecting priest who runs the dull boarding school where Kat is enrolled. Father Bests will do anything to save his school, and when contacted by an evil tycoon who is set on turning the land into a prison to profit off of mass incarceration, he is hit over the head with a reality that he never saw coming, literally.

James Hong has one of the most recognizable voices in movies and television. Hong is known for his live-action role as David Lo Pan in 1986’s Big Trouble in Little China, but as a voice actor, he has brought to life a number of characters, most notably Mr. Ping, the adoptive goose father of Po in Kung Fu Panda. Earlier this year he took on the role of Grandpa in the Gremlins: Secrets of the Mogwai television series, and has three projects currently in post-production, including Patsy Lee and The Keepers of the 5 Kingdoms. In the upcoming adventure film, Hong will portray a curio shop owner who is transported to a mystical land with his granddaughter.