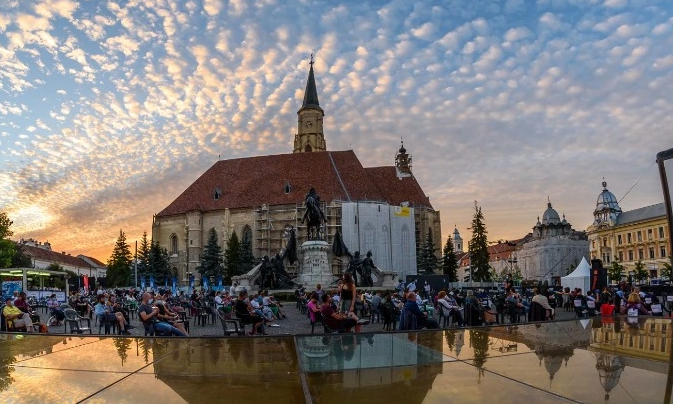 Of all the international film festivals to roll out the red carpet this summer in what feels like a global industry reboot, few can fall back on past experience when it comes to the logistics of an in-person pandemic edition. But amid the wave of cancellations that all but wiped out the calendar year in 2020, the Transilvania Intl. Film Festival managed to pull off what few others could, relying on a host of open-air venues to successfully welcome moviegoers to the medieval city of Cluj.

One year later, for what in a different era might have been a splashy 20th anniversary edition, TIFF founder Tudor Giurgiu admits, “I thought this year would be easier.” Just days after confusion over PCR tests and vaccine certificates reigned on the Croisette, however, Giurgiu and the TIFF organizing team have realized that as the coronavirus’ deadly Delta variant sweeps across the globe, a return to normal is still a good way off.

But their enthusiasm remains undiminished, and as Cluj prepares to roll out the red carpet from July 23 – Aug. 1, Giurgiu tells Variety that the TIFF team has been battle-hardened by the past year. “We [dealt] with this last year, when it was really tough and nobody knew how to organize this kind of event. And nobody thought we could do it,” he says. “But last year was a big success.”

For the festival’s 20th edition, nearly 200 films will screen in more than a dozen venues across Cluj and its surrounding environs, beginning with Cesc Gay’s “The People Upstairs,” which opens the festival July 23 with an open-air screening in the city’s historic Union Square.

“In 2020, we were forced to postpone the festival for late summer and consequently worked on several scenarios, trying to accommodate sudden changes, random restrictions and nauseating absurdities,” says the festival’s artistic director, Mihai Chirilov. “We managed to pull off an entirely physical edition with evening open-air screenings only in multiple locations and zero incidents, with less films than usual, so the real victims were the films I had to remove from the final program.

“Given the gloomy year that just passed and the potential mood of the viewers, we went for more feel-good movies (and made this clear from the very beginning, with our choice for the opening film), of course without neglecting the tough and provocative ones that make TIFF so edgy and special,” he adds.

Vying for the Transilvania Trophy, which will be awarded to one of the 12 first- or second-time directors in TIFF’s main competition, are recent festival hits such as “Apples,” by Christos Nikou, which opened the Horizons sidebar of last year’s Venice Film Festival; “The Whaler Boy,” Philipp Yuryev’s Venice Days prize winner; Iuli Gerbase’s Sundance selection “The Pink Cloud”; and the widely praised Berlinale titles “Preparations to Be Together for an Unknown Period of Time,” by Lili Horvát; and Alexandre Koberidze’s “What Do We See When We Look at the Sky?”.

The Romanian Days competition, meanwhile, will feature 12 titles from young local filmmakers, including Eugen Jebeleanu’s “Poppy Field” and Bogdan George Apetri’s “Unidentified,” both of which are also in the running for the Transilvania Trophy. Other local titles to compete include Ruxandra Ghițescu’s Sarajevo premiere “Otto the Barbarian,” Daniel Sandu’s Shanghai player “The Father Who Moves Mountains,” and Andrei Huțuleac’s debut “#dogpoopgirl,” which took home the top prize at the Moscow Film Festival this year. Beloved director and TIFF mainstay Nae Caranfil, meanwhile, whose last film, “6.9 on the Richter Scale,” opened the festival in 2016, will be feted with an Excellence Award for his contributions to Romanian cinema.

The festival’s industry platform, which has long been a vital launching pad for filmmakers from Romania and the wider region, returns with a hybrid edition, with events like the Transilvania Pitch Stop – a pitching competition for projects from first- and second-time directors from the region – taking place both online and onsite in Cluj on July 29.

New to the industry section this year is the Drama Room, a program dedicated to drama series creation and financing which aims to build capacity locally and across Southeastern Europe. Another new addition is the Full Moon script contest, which is dedicated to genre films and episodic series.

The events showcase Transilvania’s ability to adapt to the times, two decades after the festival launched as Romania was still charting its unpredictable path out of the communist era. Perhaps at no point in its 20-year history has that ability proven more necessary than in the midst of a pandemic that has upended even the best-laid plans.

Case in point: Just days before opening night, the Romanian government added Spain to its red list of high-risk countries for new and existing strains of coronavirus, subjecting travelers from the Iberian nation to a 14-day quarantine upon arrival in Cluj.

The measure would hardly be ideal under any circumstances, even more so when the Transilvania fest has partnered with San Sebastian for a focus on Spanish cinema that includes a wide range of special screenings, talks and masterclasses.

“It’s pretty bizarre how things are changing from one day to another, and of course this affects how you are shaping” the festival, Giurgiu says, adding that the festival team is working with the government to find a solution to accommodate Spanish guests. Yet given the unprecedented challenges of the past year, the TIFF topper insists that the festival is once again proving its ability to beat the odds. “Now it feels like a celebration.”