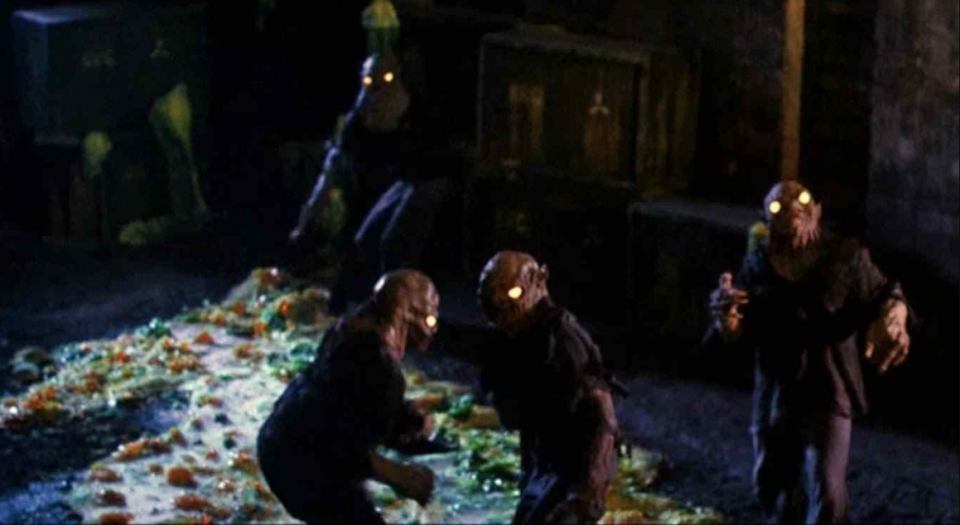 Whether you’re a child of the 80s or a horror aficionado, there’s a good chance that you’ve come across the 1984 trash film CHUD. While many remember it fondly as a relic from a bygone era of low-budget, low-production scream fests that were scattered throughout the decade, others have come out and called it for what it is: an awful film that has remained relevant because of its high marks on the “unintentional comedy scale.” In fact, in some circles, the movie about Cannibalistic Humanoid Underground Dwellers, or CHUDS, that emerge from the Manhattan sewers to feed on unsuspecting prey is a cult favorite. While I respectfully disagree, it is undebatable that you can still find plenty of Saturday night enjoyment with CHUD and some popcorn, but it may not be for the reasons that those involved in the project intended.

In director Douglas Cheek’s menagerie of camp, we find our main character, A.J. “The Reverend” Shepherd (Daniel Stern) as the manager of a soup kitchen for the homeless that have taken up in the abandoned subway tunnels of New York. Stern is an excellent comedic performer who has carved out a fine career by not taking himself too seriously. In CHUD, Stern is a young performer who portrays A.J. as a fiercely overwrought protector of his wayward patrons and when he notices that some of them have mysteriously disappeared, he takes action – melodramatic action. Deciding to get the police involved, A.J. is met by Captain Bosch (Christopher Curry) who is initially skeptical, but when his wife is among those who have gone missing, he’s all in with A.J. and the two team up as a schlocky Starsky and Hutch in an effort to get to the bottom of it.

Another concerned citizen is George Cooper (John Heard) who has apparently given up a very lucrative, high paying job as a fashion photographer to document the lives of the underground homeless population. Aside from his character’s shockingly poor career decision, it’s also his passion. So when he also decides to venture down into the tunnels in an effort to document the troubling disappearances, we have an investigative dream team of pretty good actors making some seriously questionable dramatic choices and being accosted by assorted underground dwellers of the human kind that are portrayed as urban hillbillies who are either wildly insane or unable to speak in full sentences. The result is some very high marks in misdirected pulp that may have you coughing up popcorn kernels from laughter instead of fear. Nonetheless, they’re on the case, and a mysterious threat looms around every dark corner and serpentine abandoned railway.

But, what are the CHUDs, and why have they suddenly appeared in the heart of New York City’s underground? More people are disappearing as the cannibalistic monsters have been forced to the surface and are taking people off the streets because the food supply in the tunnels has dwindled. Sounds like something out of H.G. Wells’s classic The Time Machine, doesn’t it? Subterranean Morlocks that are sustained by the helpless, land-roaming Eloi population. Perhaps it’s Cheek’s tribute to one of the greatest science-fiction horror stories ever created or possibly just pure coincidence? We’ll let you decide. The creatures that are supposed to chill us to the bone are no Morlocks. Instead, they come across as a band of misfit abominations. A collection of half-gorns from Star Trek and half-sleestaks from Land of the Lost. Their eyes are a bulbous, glowing yellow, and their movements are at a glacial pace.

These B-level monstrosities move so slowly that the Titanic would have easily dodged them. The jump scares are more like jump-cuts to a tight shot of a dagger-toothed lizard followed by some screaming and a bucket of blood being thrown from just off camera. And when our director does call for the camera to pan out for a better look at our terrifying marauders, it becomes very apparent that the CHUDs are little more than some uncredited extras and production assistants that were cajoled into donning some laughably restrictive scaly suits. The editing and special effects are so amateurish that even the Russian film judges would have to award a 10 on the “unintentional comedy scale.”

As our trio of protagonists gets nowhere with the suspiciously unconcerned bureaucrats above ground, they continue digging into the mystery of the CHUDs. After some comic run-ins with the creatures, they manage to uncover some conveniently-placed top secret files that explain everything. Cannibalistic Humanoid Underground Dwellers are actually the result of a Nuclear Regulatory Commission conspiracy intended to cover up toxic dumping, or a program called Contamination Hazard Urban Disposal.The waste has somehow transformed the humans into radioactive mutants. Unfortunately, we lose Captain Bosch to a gunshot in the back, as the head of the Commission has to keep his dastardly deeds from being exposed to the public, but not before he’s able to free the trapped A.J. and George from a precarious situation within the sewers. They immediately avenge his death and kill the Commissioner in an underwhelming sequence involving an exploding vehicle that looks more like an ice cream truck.

And that’s it! Roll credits. Fade to black. No tie-ups of several loose ends and no explanation as to what the consequences would be for those involved. Perhaps it is a fitting end to a film that marked a period in horror when even a film with a shoestring budget that is just a rung above a home movie could gain a wide release and earn $4.7 million at the box office. An homage to a past era of 80s trash cinema that, if you like laughing at films that are supposed to be serious, you really should see. So the next time you’re scrolling through your options looking for something to watch, skip the comedy suggestions and search for CHUD streaming now on Amazon Prime. With its high “so-bad-it’s-good” quotient, it makes for some campy fun on a slow Saturday night.

5 Anime Movies with the Most Unique Visualizations, Full of Color!