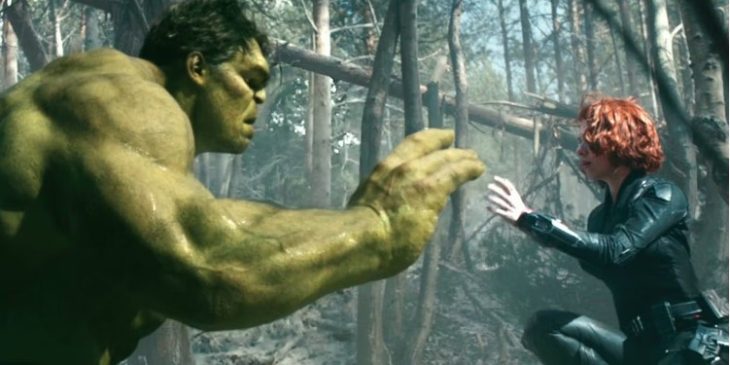 After a successful battle early in Avengers: Age of Ultron, Natasha (Scarlett Johansson) cautiously approaches the Hulk (Mark Ruffalo). Softly, she says, “Hey, big guy, sun’s getting real low.” She puts out her hand, inviting Hulk to place his in her palm. She reaches up and gently slides her fingers down from his forearm to his hand. With this, the Hulk stumbles around as he transforms back into Bruce Banner. In addition to this quiet moment establishing how the Avengers have come to control Banner’s formerly volatile transformations since The Avengers, it also serves as the introduction of a romantic relationship between the two characters. However, since the pairing of the two in Age of Ultron, each narrative decision about their relationship in the franchise since proves the MCU never knew what to do with it.

Even though Age of Ultron suggests their relationship will continue after its introduction, it’s most prominent in the first Avengers sequel. Their attraction is most palpable in a quiet scene at Hawkeye’s (Jeremy Renner) family farm. Bruce comes out of the bathroom wearing only a towel to find Natasha in her robe. She says she would have joined him but didn’t think it was the right time. This is the one scene in the entire series that finds the two in such an intimate moment, beginning with the suggestion of sex and leading to a near kiss. Though incredibly well-acted by both performers, the scene takes a jarring turn in the infamously clumsy monologue where Natasha declares herself a monster because she suffered a forced sterilization. Her ineptly written revelation steals focus from the genuine chemistry between the performers. With their most intimate moments being in such close proximity to the film’s most brazen display of its confused gender politics, their pairing also suddenly feels like it is motivated by a sense that the primary woman character needs a romantic line of action to be fully developed.

The Age of Ultron scene also foreshadows the two characters being a part of each other’s stories after they leave the titular superhero team. The scene ends with the two characters considering the possibility of running away and starting new lives. In the climactic battle sequence, though, Hulk leaps into a quinjet to prevent Ultron from escaping. Hulk tosses the villain out, but rather than returning to the team, he flies away. He even shuts off a transmission from Natasha as she tries to get him to turn around. After spending the film building up their relationship and suggesting that these two characters would eventually be making their exit as a pair, the ending here feels like a deliberate cliffhanger, inviting the audience to anticipate their eventual reunion.

And yet, their relationship is never given the same treatment again. Natasha’s next appearance in Captain America: Civil War dismisses their relationship nearly altogether. Even the Sokovia Accords scene featuring footage of Hulk and the mention of Banner’s absence yields no reaction from Natasha. Hulk’s return in Thor: Ragnarok gives their relationship slightly more significance as Natasha’s video message to Hulk from Age of Ultron is what returns him to his Banner form. Though their relationship is actually acknowledged, there is little follow-up on the actual romantic component of their pairing. Rather, her presence primarily serves as a plot device in order to de-Hulk Bruce. Importantly, though, its mention in Ragnarok does suggest that there is more to explore here. If Natasha’s presence is strong enough to bring Bruce back after two years as the Hulk, doesn’t that mean that their relationship deserves more attention in future entries?

Both Avengers: Infinity War and Avengers: Endgame are unsure how to move forward with their relationship, though, even once the characters are reunited. In Infinity War, Natasha and Bruce see each other for the first time in years, sharing a long stare and saying each other’s names. After a beat, Falcon (Anthony Mackie) makes a joke about their reunion being awkward. And yet, any awkward tension (which would seem almost unavoidable when two characters are reunited after years apart) is seemingly resolved by that bit of comedic relief. It feels as if the film understands it needs to acknowledge that they were something of an item but does not know what to do with it from there.

Endgame finds the characters once again reuniting after another years-long separation. Just as happens in the previous film, their relationship is reduced to a shared line and longing look. During the diner sequence that introduces the now-fully in-sync Smart Hulk, Natasha recalls how he once thought it would be impossible for both Banner and Hulk to ever coexist. Since that is apparently the reason the two did not end up together, this line definitely serves as a reminder that they were once romantically involved. Though dismissive of their relationship by way of its minuteness, the line simultaneously suggests that there could be something unresolved between them. After Natasha’s death halfway through the film, though, no resolution ever comes.

“This time I was kind enough to divulge some free movies to watch online. So, tell your friends by sharing some of these movie posts, you don’t have to go far to go to the cinema, just watch on your cellphone/pc, you can watch this movie by clicking the link I shared.

365 The Next Days Dubbed Thailand