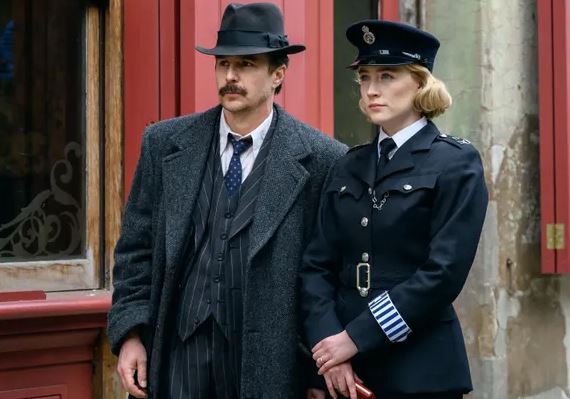 Being threatened, as we are, with an endless string of ropey yet lucrative Agatha Christie movies with Kenneth Branagh phoning in anuzzer rurbeesh turrrn as the Belgian sleuth, this comedy is a relief. It’s a likably silly and relentlessly camp whodunnit spoof from screenwriter Mark Chappell, centred on Agatha Christie’s long-running play The Mousetrap, and an imagined brutal homicide that took place backstage in its London West End theatre in 1953 – when the production was a mere 100 performances old.

A brash Hollywood director played by Adrien Brody, who is planning to bring The Mousetrap to the screen, is found horribly murdered in the costume department. Sam Rockwell and Saiorse Ronan have a droll sort of platonic police chemistry as the investigating officers: Inspector Stoppard (a nod to Tom Stoppard’s own spoof meta-mystery The Real Inspector Hound) and his overeager assistant with a silly peaked cap, Constable Stalker, possibly a homage to Tarkovsky or to the former deputy chief constable of Greater Manchester John Stalker. Tim Key (normally Alan Partridge’s sidekick on the parody show Mid- Morning Matters) is very funny as the glowering Met police commissioner.

The forces of law and order face the usual pasteboard galère of poutingly resentful suspects among the Mousetrap cast – including young Dickie Attenborough, who really was the Inspector in the original run, and here played very entertainingly by Harris Dickinson. David Oyelowo is Mervyn Cocker-Norris, the highly strung writer who had been tasked with adapting The Mousetrap for the cinema, Reece Shearsmith (who probably deserved a few more funny lines) is the producer John Woolf – another real-life character – and Ruth Wilson is the manager Petula Spencer.

There’s a very entertaining daftness and theatre nerdery to See How They Run (the title sounds uncomfortably like Run For Your Wife) as director Tom George takes the same approach to The Mousetrap that Ken Russell took to The Boyfriend: playing up the artificiality of it all. The comedy is shallow in the right way, and Rockwell’s bleary world-weariness contrasts nicely with Ronan’s saucer-eyed idealism. I think George may also be aiming for a Wes Anderson-ish approach – although not so much that you’d notice, and this may just be the presence of Ronan.

This is a disposable film with no pretensions, entirely without the deadly seriousness with which Agatha Christie is now adapted. I’d like to see Rockwell and Ronan reunited for a complete new detective franchise, our two cop heroes perhaps encountering Dorothy L Sayers and Ngaio Marsh.