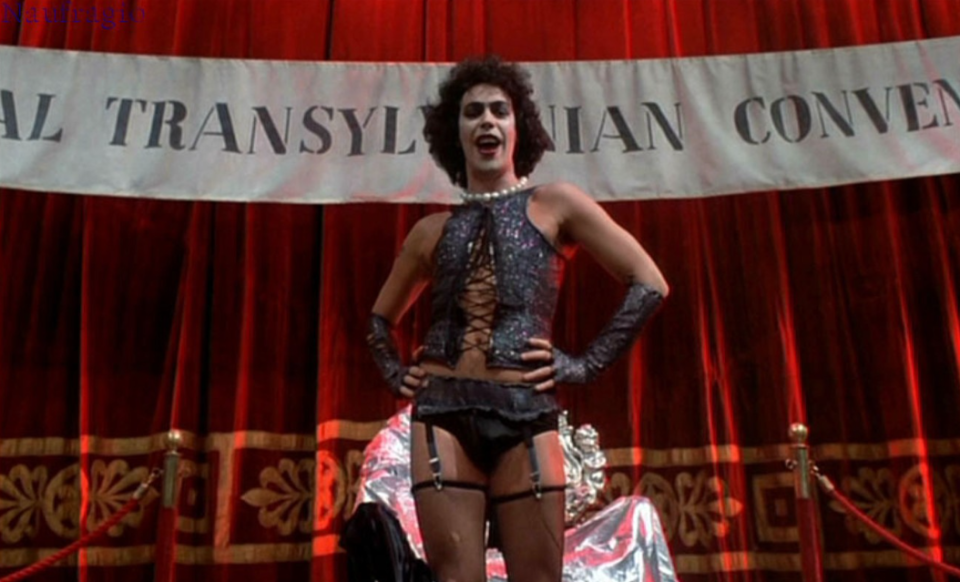 Go to any screening of The Rocky Horror Picture Show this Halloween, and for every horn-rimmed and cardigan-clad Brad and Janet you see in the audience, you’re likely to spot five or ten corset-and-fishnet-wearing Dr. Frank-N-Furters. But Brad and Janet are the protagonists and they’re supposed to be the heroes – they’re even labeled as such in the opening credits, in case viewers had any doubts. So why is it that so many of us find ourselves wanting to emulate the villain?

It might not be obvious to Rocky Horror fans that Frank (played inimitably by Tim Curry) is the villain, since he’s by far the most interesting character and he’s so much fun to watch. But the evidence that he’s a bad guy is pretty irrefutable. After all, he murders Eddie, then feeds him to his guests, including Eddie’s lover Columbia. He whips Riff Raff when Riff Raff allows Rocky to escape; for that matter, he keeps Rocky in chains and holds Dr. Scott against his will, and his sexual encounters with Brad and Janet are dubiously consensual at best. And while we might be tempted to give him a pass by labeling him an antihero rather than an actual villain, he doesn’t fit the typical antihero mold. Antiheroes tend to be the manliest of men – your John Wicks, your Michael Corleones, your Patrick Batemans. No, Frank is part of a long cinematic tradition of queer and queer-coded villains, and he might be the most complicated and lovable of them all.

What keeps us rooting for Frank, despite the evil he does? Perhaps it’s that the heroes are so bland, while Frank is so fabulous. Brad and Janet are as generic as possible by design, right down to their tighty whities, while Frank’s look has become downright iconic: the makeup, the sequins, the heels, the pearls. Or perhaps it’s that, by the finale, even most of those whom Frank has wronged (Brad, Janet, Rocky, even Columbia) end up on his side. Columbia joins Frank in the pool for a make-out orgy even after he murders the man she loved, and Brad defends him against Riff Raff’s accusations despite having been Medusafied and dressed in drag against his will, not to mention tricked into a homoerotic experience that he almost certainly did not have in mind when he knocked on the castle door. And Rocky, who is only a few hours old (and it’s been a traumatic few hours at that), tries to save Frank from Riff Raff’s attack, carrying him up the RKO Radio tower King Kong-style even after Frank is clearly dead and sacrificing his own life in the process.

But maybe the real reason we love Dr. Frank is something more subtle and more subversive than all of that.

Frank Is No Hero, But He’s More Than Just a Bad Guy
Frank isn’t just another queer villain who’s more entertaining to watch than the white-bread heroes he plays opposite. He takes every stereotype that bigots have been trying to leverage against queer men for decades and runs with them, and he doesn’t apologize for any of it. Hypersexualized? No question. Trying to recruit others into his “lifestyle”? He himself sings, “Give yourself over to absolute pleasure” – this as he forces his captives to perform alongside him in a drag show. He despoils both the virginal Janet and the macho Brad – like so many villains in the last century of film, he’s a threat to the woman’s purity as well as the man’s masculinity, and he knows it.

And yet there’s something very satisfying about his lack of remorse and refusal to show regret, something satisfying about seeing an out and proud queer person laugh in the face of the bigots and say, yes, I am exactly all of those things that you were afraid of, and I’m not sorry about it. You should be afraid.

In the final scene, after Riff Raff and Magenta inform Frank that they’ll be returning to their home planet of Transsexual in the galaxy of Transylvania, Frank sings his final number, “I’m going home.” As he sings, he sees before him an imaginary audience full of wealthy-looking elderly people dressed as if for the opera. He hears their applause as he finishes the number and sees them begging for his autograph and giving him a standing ovation. This vision is quickly revealed to be either a hallucination or a fantasy, but the point is that despite his sins, he still believes himself to be supremely lovable, supremely attractive, and supremely desirable–something that queer people were not allowed to believe in 1975 (and in many places, are still not allowed to believe today).

As Brad and Janet represent the normal, the conventional, the safe, Frank represents a challenge to those norms, the unconventional, and the dangerous – and he enables others to realize that they can do the same. His very existence as a confident, queer, trans, non-conforming person is in itself a transgression. Dr. Scott’s line near the end is telling; when Brad realizes that Riff Raff plans to kill Frank and demands, “What’s his crime?”, Dr. Scott responds, “You saw what happened to Eddie. Society must be protected.” The implication is much more than that society must be protected from a murderer. Rather, society must be protected from people like Frank – people who have not only fought violently against the prison of gender norms but are capable of recruiting others to their cause.

Although the vanquishing of the villain is usually the climax of a film, Frank’s death feels like the low point, a tragedy rather than a triumph. If you simply examined the facts, you could almost make the case that Riff Raff was justified in murdering Frank, given his abuse at Frank’s hands and his knowledge of Frank’s crimes. And in another type of story, the downtrodden Riff Raff’s victory over his oppressor would have been something to celebrate, yet Frank’s end is indisputably a sad one. It’s jarring, even, because it’s the first time we see any cracks in Frank’s fearless façade, as he flees Riff Raff’s laser and tries in vain to climb the curtains to escape. The larger-than-life figure turns out to be mortal after all, and no one rejoices.

Those of us who grew up any variety of non-conformist – gender or otherwise – and were constantly and sometimes violently corrected back into place by society see something heroic in Frank’s villainy. We can understand how he finally reached f— it and decided to be who he is and dress how he wants, to become the sweet transvestite he was born to be, and to destroy anyone who stands in his way. And perhaps our heroes Brad and Janet, who have also been constrained by conformity all their lives, see it too. Frank awakens something in them – and in all of us – that makes us want to do the Time Warp with him again and again.

‘Lord of the Rings’: The Rings of Power, Explained