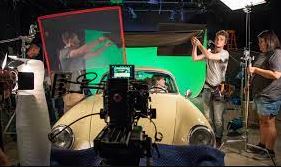 New Mexico has a long, distinguished history in the film industry. Tom Mix made silent movies in the early 1900s and award-winning classics such as Easy Rider and No Country for Old Men were filmed in northern New Mexico. Over the last several years, the hugely successful Breaking Bad and its spin-off Better Call Saul were filmed mostly in the Albuquerque area.The film industry is booming more than ever in the Land of Enchantment and The University of New Mexico has stepped up to fill the need for trained, talented workers through its Film & Digital Arts department.However, the thriving film program is outgrowing its current headquarters. On the ballot in this current election, voters will find a GO Bond 3, an item for funding for a new Center for Collaborative Arts and Technology that will help the burgeoning program grow.

In 1972, UNM started offering the first film and television courses in its Department of Theatre Arts. In 2019, the Department of Film & Digital Arts was created and redesigned itself to meet the demands of the ever-growing New Mexico film industry. Today, UNM is a powerhouse of opportunity for students looking into joining the growing film industry across the country, as well as in New Mexico with its historic legacy as a film capital.F&DA department Chair James Stone noted that the GO Bond funding would ensure that his department would have enough space to educate the unprecedentedly high number of students registering for a film and digital arts degree.“The department has seen a huge increase in majors and pre-majors over the last six years, from 256 to 616, making it one of the fastest-growing programs at UNM. If we are to continue offering students a cutting-edge digital media education, high-end facilities are vitally important,” Stone said.

“Film is one of two growth industries in New Mexico along with oil and gas. We’re now the largest department in the College of Fine Arts and the least funded. We’re outgrowing ourselves, we have so many students,” said Professor of Practice Matt McDuffie, who has taught screenwriting at The University of New Mexico for the last 22 years.

The film industry has a substantial impact on the state’s economy. More than 100 projects were filmed in fiscal year 2022 and spending in New Mexico by the film industry was over $855 million. Netflix has set up shop in Albuquerque and committed to spending at least $2 billion and dozens of shows and films are in constant production around the state.

“Even after the coronavirus pandemic shut down filming for months on sets around the country, New Mexico broke its own records for film and TV production spending, reaching about $623 million in the fiscal year from July 2020 to July 2021, according to the New Mexico Film Office. State officials say that about 9,000 residents work in the industry, with an average annual wage of about $56, 000,” said a story in The New York Times.

“We teach the skills that allow graduates to work as crew, build careers as creative decision-makers such as directors, producers, and cinematographers, and make an impact in the business of moviemaking,” Stone said. Students have found careers in not just the state’s film industry but also in such diverse careers as non-entertainment gaming at Sandia National Laboratories.

“Our graduates are instrumental in the growth of New Mexico’s thriving film industry,” Stone emphasized.

When voters in the state get to the polls in the current state election they’ll find a GO Bond item on the ballot for funding for a new Center for Collaborative Arts and Technology at UNM. The College of Fine Arts is asking for $45 million for the new facility, which will replace the current building that was built in 1963 to serve a much smaller student body, and condense the current number of CFA buildings.

The proposed CCAT will reduce the 13 separate buildings the College of Fine Arts CFA now occupies and create a more efficient, cost-effective, and sustainable use of space in both energy usage and economically. The estimate includes new construction of a multi-story building with technical and equipment labs and performance spaces for Music and Theater, Art and Technologies, and Fine Arts education.

To remain competitive with peer fine and studio art colleges in the southwest in recruiting and retaining students and faculty and to be able to grow New Mexico’s workforce in the film, music, and other creative arts industries, the College of Fine Arts must offer the technology and facilities that are necessary for these practices. Students and faculty need instruction, research, rehearsal, and performance space with appropriate ventilation, sound systems, light, and acoustics, depending on each specialized art program.

‘Black Adam’ Is Currently The Fourth Worst-Reviewed DCEU Movie Ever