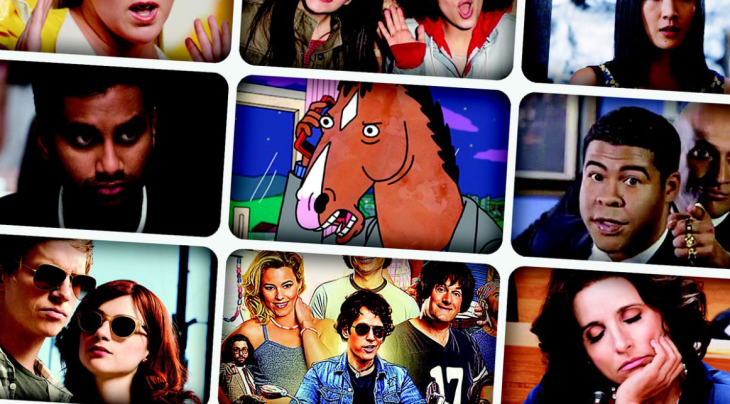 GLOW was sadly taken from us too soon when a fourth season was unceremoniously canceled after it had been renewed. GLOW deserved better, but then again, maybe it’s appropriate that we never got to see these hard luck characters get the closure they deserved. After all, unfulfilled hope and the promise of what could be are the bedrock of all great underdog stories, and GLOW remains one of the greatest in recent memory. – Mike Cecchini

In season 1 of the Netflix series, Nadia Vulvokov (Lyonne) dies on the day of her 38th birthday, only to “loop” back right to the bathroom of her birthday party. She quickly discovers that she won’t make it very far past that moment before dying again and ending up right back where she started. Season 2 then ups the ante by introducing honest-to-goodness time travel via the 6 train in Manhattan. Through all the timey-wimey shenanigans, Russian Doll remains a grounded, entertaining experience thanks to its good sense of humor and the truly excellent performance from Lyonne at the show’s center. – AB

Bob’s Burgers is about the Belcher family’s respective attempts to keep their restaurant business afloat (Bob), live laugh love (Linda), look at butts (Tina), become his generation’s Shakira (Gene) and force the world to kneel to her cruel dominion (Louise, nine years old). They’re joined by a genuinely great and often surprising guest cast of cult comics and big-name stars in stories with jokes and often, pathos. The real star of the show though? That’s the songs. Stay to the end credits for some of the toe-tappingest ditties you’ve ever heard about goats with two butts, getting Beefsquatched, and poking dad’s jiggles. – Louisa Mellor

LATEST TV REVIEWS
The Suspect Episode 2 Review: The Plot Thickens. The Show Also Grows More Thick
By Rosie Fletcher
House of the Dragon Episode 3 Review: Second of His Name
By Alec Bojalad
The Lord of the Rings: The Rings of Power Episode 1 and 2 Review
By Juliette Harrisson
AD – CONTENT CONTINUES BELOW

If the show was just watching Nathan hatch and execute his whacky ideas, it would still be funny, but the series goes the extra mile by turning the real Nathan Fielder into “Nathan Fielder,” a more awkward, isolating version of himself who’s weirdly confident in his business acumen, but is actually motivated to help business owners by his desire to connect with other people. Nathan is desperate for romance, or even a friend, and he carries his quest to find connection throughout the series, with hilarious results. Nathan For You expertly blends the dramatic reality elements of series like Bar Rescue with Andy Kaufman-like cringe comedy, creating something truly unique and most importantly, hilarious. It transcends a normal prank or reality show by offering real, poignant observations about human nature. Now that’s good business. – NH

The unlikely Apple TV+ flagship launched out of an NBC ad campaign, Ted Lasso sounds like one of Sudeikis’ old SNL setups: a happy-go-lucky American optimist agrees to become the manager for a professional football (soccer) team in the UK despite knowing nothing about the game. It’s a riff on the thin plot of Major League where the team’s new owner, here played by a magnificent Hannah Waddingham, is setting Ted up to fail. But the brilliance of Ted Lasso is that for all its use of archetypes and sports movies conventions, there’s a real affection for these characters, including their interior mental health. Waddingham is not a villain, but rather the superb counterweight to Ted’s sunshine, and the yin and yang of their always evolving relationship is at the center of how such a simple show can cultivate such complex emotions from its audiences. It’s a heart-to-heart with your best mates. – David Crow

Past his prime and out to stud, BoJack clumsily circumnavigates the modern landscape of celebrity, tripping on the #metoo movement, galloping over cancel culture, and planning a comeback. Princess Carolyn may never balance work and home life, but the series perfectly aligns comic and dramatic narratives into an emotional rollercoaster of depressing hilarity. Loaded with amazing repartee, one of the best episodes is a half hour soliloquy and another doesn’t let Bojack speak at all. It’s gone now, but don’t fret, we may never unsee “The View From Halfway Down.” – Tony Sokol

“Nobody exists on purpose, nobody belongs anywhere, everybody’s going to die. Come watch TV,” Morty advises, and he’s not the smart one in the dysfunctional Smith family, unless he is and just coexisting with himself until he grows into his nihilistic, alcoholic, morally bankrupt counterpart. But don’t think too hard, Rick and Morty is already science fiction’s most self-explanatory comic self-examination. It is also an in-depth skewering of philosophy, technology, and what the Bird People call the endless “wubba lubba dub dub.” So celebrate. After all, weddings are basically funerals with cake. – TS

Sure, it started out with the locals in the titular town coming across as faceless weirdos from the Rose family perspective, but while Moira (Catherine O’Hara) began as an aloof matriarch and her daughter Alexis Rose (Annie Murphy) started out rather shallow, Schitt’s Creek allowed the characters to learn from their environment without changing them at the core. The show even concluded on its own terms, giving the Roses – and David (Dan Levy) in particular – a happy ending. – MA

Credit creator Liz Meriwether and her writing team for wisely incorporating the cast’s natural strengths and personalities into the characters and letting the actors riff and rely on their authentic chemistry. It was always fun when a new guest star, usually a romantic interest of one of the core four, entered the mix and altered the dynamics of the loft. New Girl also featured one of the best will-they-won’t they pairings with Deschanel’s Jess and Johnson’s Nick, where their friendship, romance, breakup, and reunion felt natural and earned. A lot of the shows on this list have elaborate hooks or concepts, but New Girl proves as long as you have the right cast, you don’t need much else for a winning comedy. – NH

HBO has a tradition of turning anti-heroes into beloved figures going back to The Sopranos, and everyone is a villain in the Beltway offices of Veep. Julia Louis-Dreyfus puts teeth in an already vicious character, and does it with criminally callous disregard and deeply moving immersion. The series was nominated for an Emmy each season it ran. Louis-Dreyfus won so many Outstanding Lead Actress in a Comedy Series’ Emmys for the part, she had to be put on a do-not-nominate list. – TS

Each episode moves in such unexpected ways that when, say, a Black Justin Beiber or an illegally housed alligator pop up, you don’t know whether to laugh or ponder the deeper meaning. Don’t get it twisted though; just because Atlanta is brainy and odd doesn’t mean that it isn’t laugh-out-loud funny, it just may take a repeat viewing for the off-kilter jokes to land. Atlanta is a wild, weird, and fiercely funny show, but don’t be surprised when it pops up on our best drama series list too. – NH

Brooklyn Nine-Nine is the best New York boro-based cop comedy since Barney Miller. They busted murderers, took down cartels, burned the fire department, and still have time for erotic Die Hard cosplay. Starring Saturday Night Live’s Andy Samberg as Detective Jake Peralta, but overseen by Andre Braugher’s Captain Raymond Holt, the English language cannot fully capture the depth and complexity of the ensemble. Interdepartmental pissing matches turn every word into a workout, and Sergeant Terry Jeffords (Terry Crews) is ready to flex at a moment’s notice. Detective Rosa Diaz (Stephanie Beatriz), the Robocop of the squad, gave up gratuitous violence for perfectly-timed edibles. Gina Linetti (Chelsea Peretti) was the human form of the 100 emoji, except at her desk. Amy Santiago (Melissa Fumero) is enthusiastic, ambitious, and certifiably obsessive in her compulsion for perfection.

More than just its sunny outlook, Parks and Rec endures due to the strength of its ensemble; any number of its characters could be paired up for a B or C plot for fresh and always winning results. Also, like The Simpsons, Parks created a rich world filled with ancillary supporting characters that scored big laughs with every repeat appearance. And whenever the show did dip into cringe or misanthropic comedy that was so prevalent during its era — be it at Jerry or Eagleton’s expense — it always hit harder due to how opposed it felt to the show’s warm, gooey center. Parks and Recreation is truly a special sitcom that proves being big-hearted and compassionate can still be funny. – NH

Barry quite literally has it all. Action? Yes. (Dry) laughs? Absolutely. (Awkward) romance? You know it. Tension and suspense? Enough to probably even make Vince Gilligan think maybe they should chill. All that and the single most delightful character on TV in Henry Winkler’s Gene Cousineau? How dare they. – MC

Along with Bell’s trademark cute-and-crass delivery, The Good Place introduced us to the likes of D’Arcy Carden as Janet, the “not-a-robot” artificial assistant in the afterlife, and William Jackson Harper as Chidi, the indecisive student of ethics who steers the rehabilitation of Eleanor. Each season shifted the paradigm of the afterlife, but the show always stayed grounded and undeniably hilarious, from the banal evil of the “bad place” demons to the pop culture quips that many characters were known for. The Good Place is one of a kind! – MA

From its impossible-to-choose-a-favorite core cast to its incredible assortment of guest stars, What We Do In The Shadows outlives what might otherwise have been a one-joke premise in the wrong hands. But the true brilliance of What We Do In The Shadows is how even as it gives reality TV the merciless mocking that it deserves, it’s also a stunningly competent example of it and a loving send-up of every single element of the very concept of the pop culture vampire. It takes its own mythology and internal logic deathly seriously, and every episode is packed with tributes to and loving inversions of pop culture vampire lore. A modern classic destined to endure for eternity.