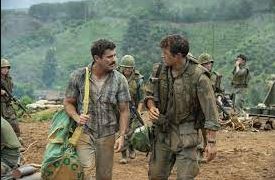 “The Greatest Beer Run Ever” is a dumb title for this film by Peter Farrelly (“Green Book”), based on the true story of a New York Merchant Marine who, in 1967, took a freighter to Vietnam just so he could spend three days on furlough bringing a duffel bag filled with American beer to his enlisted buddies from back home. The escapade by Chickie Donohue (Zac Efron) was also dumb and dangerous, and at first the film has an unsettlingly larky tone. (Maybe it’s wasn’t all that dangerous. One of the soldiers Chickie encounters remarks that “some people are too dumb to get killed,” and Chickie, who seems to have a guardian angel looking out for him, certainly fits the bill.) But he quickly gets an education, in what turns out to be a complex story that is elevated well above its title. Chickie, you see, believes in the war effort with an irritating naivete but is eventually disillusioned after he meets a cynical American photojournalist (Russell Crowe) and sees firsthand that the in-country chaos that characterizes the conflict isn’t like he imagined war to be. Yes, the protagonist is a numskull. But the movie, like its hero, eventually matures into something with a greater appreciation of nuance. It doesn’t sound like it, but “The Greatest Beer Run Ever” turns out to be a tale about moral ambiguity, about truth and lies, about PR and PTSD — and, ultimately, about the meaning of friendship. R. Available on Apple TV Plus. Contains coarse language and some war violence. 126 minutes. — M.O.

The recent canon of films reappraising maligned female pop stars of the 1990s now has a galvanizing and thoughtful new addition. In “Nothing Compares,” director Kathryn Ferguson invites viewers to consider the Irish singer Sinéad O’Connor, not as a train wreck in need of saving but as a breathtakingly courageous avatar, an artist-activist who came to both identities honestly, by way of sensitivity and supernatural vocal range as well as deep wells of empathy and garden-variety chutzpah. “Nothing Compares” opens with O’Connor at Madison Square Garden in 1992, when she stared down a hostile crowd at a Bob Dylan tribute concert, just days after ripping up a picture of Pope John Paul II on “Saturday Night Live,” an act that made her an instant pariah. Ferguson then loops back to fill in the biography leading to that moment, with O’Connor herself narrating her abusive childhood, her escape to punk-era England, her self-discovery by way of Rasta culture, gay nightlife, aesthetic camaraderie, and the birth of her son and her serenely self-contained insistence on always going her own way, regardless of the haters. With a dearth of visual material from O’Connor’s youth, Ferguson is forced to rely on hazy reenactments, and Prince’s estate sadly declined her request to license “Nothing Compares 2 U,” the song that made O’Connor a superstar. But the elements of O’Connor’s story — her bravery, prescience, ultimate vindication and that ethereal, scorching voice — take on irresistible cumulative power. TV-MA. Available on Showtime. Contains strong language and mature thematic elements. 95 minutes. — A.H.

The horror movie “Devil’s Workshop” stars Timothy Granaderos as an actor under consideration for the role of a demonologist in an upcoming film. To give himself an edge over the competition (Emile Hirsch), he enlists the help of an expert in devil lore (Radha Mitchell), who soon has him dredging up his past and sacrificing a goat. R. Available on demand. Contains violence, strong language throughout, drug use, some sexuality and nudity. 86 minutes.

Produced by Michael Shannon and Alyssa Milano, the documentary “From the Hood to the Holler” follows the 2020 campaign, across Kentucky, of Charles Booker in the Democratic primary for the U.S. Senate seat held by Mitch McConnell in Kentucky. Unrated. Available on demand. 102 minutes.

Emily Watson stars in “God’s Creatures,” a drama about a woman in an Irish fishing village who lies to protect her son (Paul Mescal) after he is accused of sexual assault. According to Variety, the film “largely avoids didactic moralizing in favor of a deeper, more sorrowful examination of interior guilt, accountability and compromised solidarity — though its touch in this regard could be lighter.” R. Available on demand; also opening at Landmark’s E Street Cinema. Contains strong language. 100 minutes.

From writer-director Ana Lily Amirpour (“A Girl Walks Home Alone at Night” and “The Bad Batch”), “Mona Lisa and the Blood Moon” tells the story of a struggling single mother (Kate Hudson) and an escaped mental patient with supernatural powers (Jun Jong Seo) whose crime rampage draws the attention of a detective (Craig Robinson). Paste magazine says the movie “highlights the filmmaker’s flair for vicious world-building through its playful use of lighting, soundtrack and character.” R. Available on demand. Contains strong language throughout, sexual material and some violence. 107 minutes.

Lea Thompson stars in “Ten Tricks” as a glamorous madam who decides, after years in the sex industry, that she wants to settle down and start a family. Unrated. Available on demand. 88 minutes.

I Used to Be Famous

The Curse of Bridge Hollow