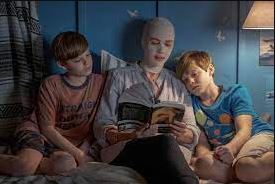 Described in marketing material as a feminist horror fantasy — whatever that means — the strange and unsettling Brazilian drama “Medusa” centers on Mariana (Mariana Oliveira), a seemingly devout young woman studying at a strict religious school, where she runs with a squad of like-minded students whose Barbie-doll-like leader Michele (Lara Tremouroux) indoctrinates her social media followers in such lessons as “how to take the perfect Christian selfie.” Michele’s posse, known by the name they perform pop songs under, the Treasures of the Lord, also happen to prowl the streets at night wearing white, Michael Myers-esque masks, accosting — and often brutally beating — any solitary woman they encounter who is deemed insufficiently modest and chaste. (Maybe “feminist nightmare” is more like it.) As Mariana evolves over the course of the film — after being slashed in the face, losing her job at a plastic surgery center and beginning a sexual relationship with a co-worker at the creepy hospital where she takes a job (Felipe Frazão) — the cohesion of the Treasures begins to disintegrate. Mariana is revealed to be a victim of partner abuse by her boyfriend (João Oliveira), and the patriarchal restraints exerted upon the Treasures by their male classmates, who also have a vigilante group known as the Watchmen of Zion, begin to fray. Directed by Anita Rocha da Silveira (“Kill Me Please”), and boasting a mythologically inspired title that evokes a fierce, maybe even monstrous woman, “Medusa” is impossible to sum up neatly, with themes of nature vs. socialization percolating throughout it, along with elements of magical realism. It’s a raw, pulsating thing: disturbing, un-beautiful and painful. Unrated. Contains violence, disturbing images, strong language and sexual dialogue. In Portuguese with subtitles. Available on demand. 129 minutes.

Inspired by the mystery-comedy novels of Gregory Mcdonald, whose most famous character is the sleuth Irwin M. “Fletch” Fletcher — played by Chevy Chase in the movies “Fletch” and “Fletch Lives” — “Confess, Fletch” stars Jon Hamm in the title role: an affable investigator who becomes the prime suspect in a murder case while searching for a stolen art collection. According to the Hollywood Reporter, the film, which also stars Marcia Gay Harden, Kyle MacLachlan, John Slattery, Annie Mumolo and Eugene Mirman, plays like “a feature-length pilot for an ’80s TV detective series — or, in the present tense, a much less ambitious American counterpart to the BBC’s string of long-form Sherlock Holmes mysteries starring Benedict Cumberbatch.” R. Available on demand; also in theaters. Contains strong language, some sexuality and drug use. 98 minutes.

Inspired by the plot of Alfred Hitchcock’s “Strangers on a Train,” “Do Revenge” stars Camila Mendes as a dethroned high school queen bee who conspires with a new student (Maya Hawke, daughter of Ethan Hawke and Uma Thurman) to enact revenge on each other’s enemies. Unrated. Available on Netflix. TV-MA. 118 minutes.

An American remake of the masterful 2015 Austrian horror film of the same name, “Goodnight Mommy” stars Naomi Watts as the mother of twin sons (twins Cameron and Nicholas Crovetti) who, after their mother mysteriously appears with her face swaddled in bandages, come to doubt that she is really their parent. R. Available on Amazon. Contains some strong language. 91 minutes.

Sony added three news movies to their 2023-2024 theatrical release sked while shifting some others due to the post-production jam which continues to plague a number of big pics. The good news is that nothing is moving out of 2022.

A big plus here is the announcement of a brand new Karate Kid movie for June 7, 2024 which doesn’t have any talent attached in regards to stars or a director.

There’s an untitled True Haunting movie from Screen Gems that is actually going on Jan. 6, 2023; that first weekend of the year has been a rich one for Sony and genre films; it’s where they launched the first Escape Room in 2019 to an $18.2M opening and $57M+ stateside, $155M+ WW. True Haunting is the only new wide release on Jan. 6 in addition to Paramount’s expansion of Damien Chazelle’s Babylon.

Also new for next year is the next installment of the Searching franchise, Missing, on Feb. 24, starring Nia Long and Storm Reid. The other two wide entries on that date are Universal’s Cocaine Bear starring Keri Russell and Margo Martindale and Lionsgate’s Jesus Revolution.