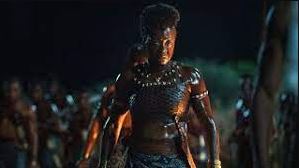 This weekend features two recent premieres from Toronto Film Festival: Viola Davis headlines a period action epic inspired by an all-female unit of African warriors, and Mia Goth reprises her “X” horror villain for a prequel origin story. In addition, Sam Rockwell and Saoirse Ronan are on the case in a 1950s-set comedic murder mystery and Naomi Watts stars in a remake of an Austrian psychological thriller, while “Stranger Things” star Maya Hawke and “Riverdale” mainstay Camila Mendes team up for a Netflix teen revenge comedy.

Here’s a guide to new movies that will satisfy every cinematic taste, plus some noteworthy theatrical films making their streaming and on-demand debuts:

It’s not every action film that clicks in almost every way it needs to, but director Gina Prince-Bythewood’s impressive epic does so and more. When the African kingdom of Dahomey is under threat from an empire, King Ghezo (John Boyega) tasks Nanisca (Davis), the general of his feared all-female fighting unit, to recruit new troops for the coming battle. Davis heads a top-notch cast that also includes Lashana Lynch (playing Nanisca’s right-hand woman) and Thuso Mbedu (as a rookie warrior).

The 1950s-set whodunit starts off well. when a world-weary London detective (Rockwell) is saddled with a punny rookie cop (Ronan) to investigate the goings-on after a visiting movie director (Adrien Brody) is found dead at a popular stage play. But the mystery loses its way as suspects pile up and the plot grows more convoluted, though the film does add in an intriguing real-life Agatha Christie angle.

The genre isn’t big on infamous female villains, which is why Goth’s Pearl is so refreshing. Set in 1918 Texas during the flu pandemic, the “X” antagonist is introduced as a farm girl wishing to be famous so she can escape having to care for her invalid father and super-strict German mom. There’s a wicked nod to “The Wizard of Oz” as Pearl eyes a dance audition and murderous intentions bubble up to her seemingly innocent surface.

Watts has starred in many redos – “The Ring,” “Funny Games,” “King Kong” – and the latest is the American take on a modern horror classic. Her face is wrapped in bandages while she recovers from surgery when her twin boys (Cameron and Nicholas Crovetti) visit. She acts unusual around them and they become convinced she’s someone else in a decently potent version not nearly as chill-inducing or disturbing as the original.

Drea (Mendes) used to be popular at her school but took a social tumble, Eleanor (Hawke) is her new classmate, and both have their foes. A chance encounter leads to the two girls teaming up to take on each other’s tormenters, with no lack of twistiness and betrayal. “Do Revenge” is a snappy, clever throwback to 1990s teen thrillers, and features a cameo that fans of those flicks will appreciate.

Letitia Wright (“Black Panther”) stars alongside Tamara Lawrance in the true-life drama as Welsh sisters who as youngsters refused to communicate with anyone other than themselves. They create a fantasy world for themselves as an escape. which director Agnieszka Smoczynska depicts as a bizarrely colorful landscape compared to a dull reality, yet their self-isolation leads them to being committed to a psychiatric hospital.

Director Brett Morgen uses the rock icon’s interviews, live footage and other archive material to assemble a trippy ride through the rock icon’s greatest hits and cultural influence. if you’re looking for a conventional documentary, this is far from it: The film is less a peek into the man and more an artistic examination, letting Bowie himself give a glimpse at his creative and spiritual sides and immersing audiences in his musical evolutions.

In case you missed it, the 1988 Winona Ryder dark comedy was turned into a stage show and this is a recorded version of a production in London’s West End. It’s definitely a different experience from the film, putting a candy-colored and poppy twist on the high school satire – Veronica gets involved with the bullying clique of Heathers, meets rebellious J.D., murders ensue – yet satisfying enough for musical theater fans.

The cultural magic of ‘Encanto’: How the ‘Disney’ film captures the essence of Latino families