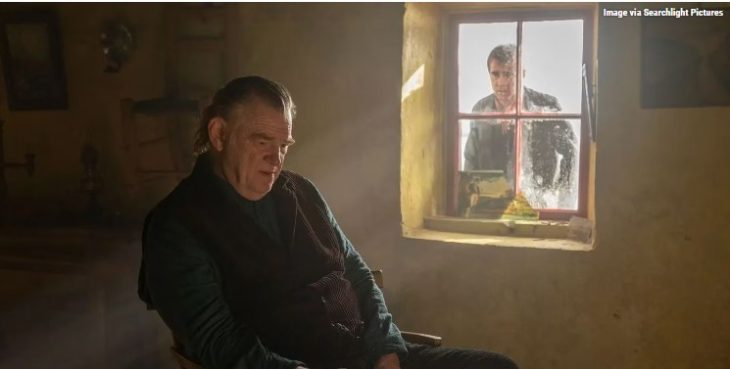 A Civil War is often described as brother vs. brother. Martin McDonagh’s follow-up to Three Billboards Outside Ebbing, Missouri is titled The Banshees of Inisherin, and it is not about a Civil War or battle. Battles are remembered. Songs are written about them. The front page is loaded with informational updates from the front. And they will make the history books. Here, brother vs. brother is reduced to a macro level of pal vs. pal. This is an ode to petty grievances, bizarre stands that won’t be remembered, but might become a tall tale at a pub. The time when two inseparable pals separated through grotesquely comical means.

On the Irish isle of Inisherin in 1923, the locals see a Civil War brewing on the mainland, but they can’t keep the sides straight; nor do they have an interest in their demands or causes, but they sure can appreciate a good fight. More directly consequential and upon their land, a row is brewing between two old drinking buddies, Pádraic (Colin Farrell) and Colm (Brendan Gleeson). Colm has decided to end the friendship like a swiftly severed limb: no more contact whatsoever. Pádraic tries to unravel what he has done to offend his friend, but it’s not any act—it’s just that Colm thinks their discussions are dull and have kept him from completing more meaningful musical compositions on his violin. He is contemplating time and weighing the time of creating something vs. the time of conversation with a nice, but dull, person. Because Pádraic is so hurt by this decision, Colm takes his request one step further to show that he truly does want their friendship to be over. He threatens to cut off a finger on his hand for each time Pádraic attempts to persuade him otherwise.

Though it may not sound like it, this is a comedy. And though it’s dark, it’s not nearly as bleak as it sounds. In addition to the feuding former friends, McDonagh has dotted the community with a curious dolt (Barry Keoghan), a gossiping postmaster, peacekeeping bartenders, an abusive policeman, and Pádraic’s well-read sister (Kerry Condon), who shares a house with Pádraic. The humor in Inisherin isn’t zany or outlandish, nor does it make fun of its characters. It’s darkly charming; deftly engaging with a community that feels like it existed long before the credits started and will continue long after they’ve ended. Inisherin feels like a peculiar snapshot. And though the plot is minor, it gives McDonagh space to make the plot his characters’ interactions.

Similar to the macro scale of friends in battle, McDonagh keeps Colm’s artistic desire attainable. Colm mentions that he wants to write compositions because kindness ends, it’s never remembered past a generation, but music has the chance to become a ritual. Something tied to a place and time that can continue. And while Colm brings up Mozart, what he’s working on is a funeral song for the island. Something sorrowful but reverent. Two words I would use to describe The Banshees of Inisherin, too.

Marriage is a pact between two people, but in some ways, it’s easier to sever and be separated through divorce than for two extremely close friends to avoid each other in a small community. Our ritual of lifelong pacts has an escape raft. Divorce comes with paperwork. Same with leaving a job. But there’s no such thing in a friendship. That you must navigate on your own, and it kicks up strange feelings of abandonment far differently. Romantic and plutonic relationships both carry an intense bond but in some ways we expect our friends to be more constant; to reassure, to listen, to pick us up, and to celebrate us. There are grief groups for so many types of loss and losing a friend who still lives among you is a type of loss that others can’t fill a void in the same exact way. It takes different types of emotional labor to be a good friend and the rewards are different, too.

Inisherin is unique to center immense grief within a faded friendship. It’s something that I personally have been going through for many months now and this film was watched at the correct time to resonate more fully with me. I won’t write out the details here, but I mention it because it’s rare to watch a film that shows an aspect of the human condition that other films have rarely touched on for the duration of a film (not just a part of a third act growing distance that gets repatched). Nor do two friends often remain equal in screen time throughout (an aside, but Girlfriends and Frances Ha both follow a diminishing friendship with comedic notes, but neither has co-leads; there is also a gender imbalance when it comes to stories of friendships where the actual status of the friendship is the plot of the movie).

Inisherin closes without a firm resolution because a neat and tidy ending won’t work with this story; this is the stretch we get to see. McDonagh ties this feud between friends as thematically linked to Civil War skirmishes (and it’s reasonable to read into modern political climates); small acquiesces to the injured party can be beneficial, but it’s more likely that the same bad blood will recirculate at a different time. History repeats itself. Being a community and relying on others through an unspoken, unsigned social pact creates a space for unmet needs to fester without the ability to make a clean break.

It helps that the actors in question all show immense emotional maturity despite the men dipping into prideful immaturity. Farrell depicts the highs and lows of mania when so much of one’s well-being is placed into the hands and decisions of another. And Gleeson, though hard-edged, finds the moments of compassion for his former friend despite his attempts to be firm. Dancing between them, Condon and Keoghan deliver marvelous supporting turns. She is of quick wit and resolve, and he is a loose cannon dimwit who eventually rises above Pádraic’s once solid moral grounding.