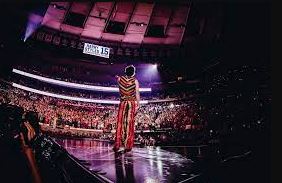 The fiscal 2023 first quarter was highlighted by a busy calendar of events at the Company’s performance venues, strength in Tao Group Hospitality’s key markets, including Las Vegas and New York, and robust sales and renewal activity within marketing partnerships and suites. Subsequent to the end of the quarter, MSG Networks began airing its full regular season telecast schedules for its five professional sports teams across both the NBA and NHL, and next week, the Christmas Spectacular production returns for its 2022 holiday season run at Radio City Music Hall with new immersive technology elements and 181 planned shows.

In addition, the Company recently announced that it confidentially submitted an initial Form 10 Registration Statement with the U.S. Securities and Exchange Commission for the proposed spin-off of its traditional live entertainment and MSG Networks businesses. Completion of the transaction remains subject to various conditions, including final Board approval.

Executive Chairman and CEO James L. Dolan said, “We are pleased with our start to the year, with first quarter results reflecting robust ongoing demand for our portfolio of assets and brands. Looking ahead, we expect fiscal 2023 to be a defining year as we make progress toward the completion of MSG Sphere in Las Vegas and our potential spin-off, both of which we believe will deliver long-term value for our shareholders.”

For the fiscal 2023 first quarter, the Entertainment segment generated revenues of $147.1 million, an increase of $112.9 million as compared to the prior year period. Event-related revenues increased $80.6 million, revenues related to the Company’s arena license agreements with Madison Square Garden Sports Corp. (“MSG Sports“) increased $18.3 million, suite license fee revenues increased $8.4 million and venue-related sponsorship and signage revenues increased $3.7 million, all primarily due to the return of live events at the Company’s performance venues during the current year quarter, as compared to limited live events held in the prior year period as a result of the COVID-19 pandemic.

Fiscal 2023 first quarter selling, general and administrative expenses of $103.4 million increased $10.4 million, or 11%, as compared with the prior year quarter. This increase primarily reflected higher employee compensation and related benefits of $10.4 million, primarily due to the Company’s MSG Sphere initiative, and higher other general and administrative expenses of $5.9 million, partially offset by lower professional fees of $5.9 million.

Testosterone Levels And Overall Health In The Body