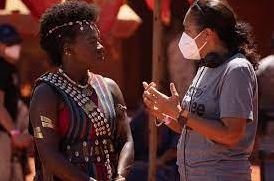 After two years of severely scaled-back, pandemic-era editions, the Toronto International Film Festival looks to make a full-throttle return this year. The festival — long known as a key platform for awards season titles as well as a launchpad for celeb-friendly commercial films in addition to more esoteric art house and international movies — runs Thursday through Sept. 18.

Expect a return to the kind of star-studded red carpets and post-screening Q&As that Toronto audiences clamor for. And although a small selection of films will be available online for viewers in Canada, the emphasis is very much on the in-person event.

“I wouldn’t call it a rebuilding year because a rebuilding year is a year when you have no hope of winning the championship. So for us this is a comeback year,” said Cameron Bailey, chief executive of TIFF. “In the sense that we wanted to come back strongly and we wanted to just remind our audience here in Toronto, and the people all over the world who would usually come to Toronto, that if they haven’t been able to come in the last two years, there’s a lot of great reasons to be here.”

Among the most notable world premieres at this year’s festival is Netflix’s sequel to the 2019 blockbuster “Knives Out”: “Glass Onion: A Knives Out Mystery,” the fourth of writer-director Rian Johnson’s films to premiere at TIFF.

Two filmmakers coming to the festival for the first time are Steven Spielberg with his semiautobiographical “The Fabelmans,” which Universal will release in theaters this Thanksgiving, and Tyler Perry with the sweeping period tale “A Jazzman’s Blues,” from Netflix.

Musical superstar Taylor Swift will appear for a conversation along with a screening of “All Too Well: The Short Film,” which she directed to go with the 10-minute version her song “All Too Well” on a newly struck 35-millimeter film print. (The film reportedly has qualified for Oscar consideration in the live-action short film category.)

As festivals emerge from the pandemic era — or perhaps more accurately learn to exist during the ongoing pandemic era — there is still a healthy sense of competition among the top-rank events including Telluride, Venice, Cannes, New York and Sundance. Yet even as the festivals may fight for world premieres or be seen as the ideal venue to launch a certain film, each maintains a unique identity.

“Each festival has its own kind of special sauce,” Bailey said. “And in Toronto, our audience has historically been that for us — their ability to find films that really break out and support them and be excited about them from their launches here. And so where filmmakers and companies want that, where they want that Toronto audience reaction, then that becomes a priority.”

Among the films screening at TIFF 2022 after premieres at earlier festivals are Sarah Polley’s “Women Talking,” Darren Aronofsky’s “The Whale,” Florian Zeller’s “The Son,” Sebastián Lelio’s “The Wonder,” Mia Hansen-Løve’s “One Fine Morning,” Sam Mendes’ “Empire of Light,” Martin McDonough’s “The Banshees of Inisherin” and Rebecca Zlotowski’s “Other People’s Children.”

Below are 21 of the most notable world premieres from the TIFF program. Some we have seen already, and others we will be seated for when they’re unveiled.