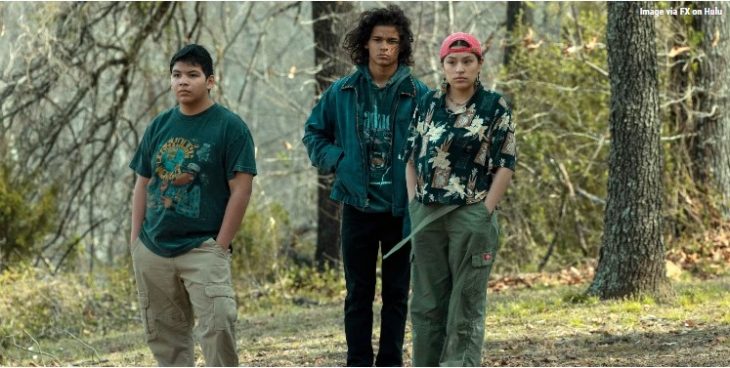 With the third season of See now streaming on Apple TV+, I recently participated in a group interview with Jason Momoa to talk about the making of the final season. During the interview, Momoa talked about why the series ended with Season 3, how they shot Season 2 and 3 back-to-back before he made Aquaman 2, what he learned about acting while making See, bringing in Michael Raymond-James, and having to loop the entire final fight scene and why he hated the process. In addition, he talks about filming the big final fight scene with second unit director Damon Caro, and why people like watching him punch villains in the face.

If you’ve never watched See, the series takes place in the future, after a deadly virus decimated humankind. Those who survived emerged blind. The series follows Momoa’s character, Baba Voss, the father of twins born with the mythic ability to see, as he tries to protect his family from those that would use or kill his children.

JASON MOMOA: I think about a little bit of both. I think three seasons is pretty perfect. I mean, just depending on the show, but I feel like this was the perfect time to kind of wrap it all up. I feel like a lot of shows I’ve been part of didn’t plan for that. And then those seasons and everyone’s always bummed out and the fans are bummed out, and I think that’s the thing where I’m like, “Yes, let’s wrap this up. Let’s do it.” And truth be told too, it’s like we’ve got so many projects coming up too, that we’re doing. It’s like, let’s focus on See. So we shot back-to-back Season 2 and Season 3 before I went to go do Aquaman 2 so.

Across working three seasons with Joe Stretchay, what would you say was the biggest acting lesson that you got to walk away with in your toolbox forever?

MOMOA: Well, the training that Joe put us through in the very beginning was wonderful. I didn’t go to too many acting classes or courses, but learning and understanding what it’s like or what it would be like to basically just depend on your other senses was a huge for me […] Sorry, this list may go long. We can stay out longer, but you asked this so. We did the scene where me and Hera, we don’t really have these love-making scenes. How do you do husband and wife? And so not to get too personal, but when you’re with your partner, generally, you love your person’s smell. And women are definitely way more into pheromones than men are. And so with that, we were talking to Joe, I’m like, “Wow, there’s this one thing where she likes my smell and I hate my smell,” so you put deodorant on.

But they love that pheromone smell. And so we did this little workshop where Hera is just trying to smell me, and I’m trying to get away from her smelling me. It’s become this intimate to the point where I’m laughing, and she’s like dive-bombing my armpit. And I’m just trying to push her away from everything. But it becomes so intimate and loving that from that little exercise, it just was this intimacy that is like, I’ve delivered our children. It was something where I didn’t have to kiss her or know what it’s like, or have those awkward things on set. It becomes like I grab her hand, and she’s my wife, and it made it really comfortable, these little exercises we did that Joe helped us find and inspire to. So I’m sorry. That’s a little example of things that we just don’t have a chance to do. I haven’t done yet so.

So last season Baba was up against his brother and this season everyone’s up against Maghra’s sister, Queen Kane. What do you think is the most compelling aspect of having the protagonist’s sibling be a villain?

MOMOA: Well, she’s been the villain the whole goddamn time she’s been hunting my children’s whole life. So, I mean, I hate that woman. So the great thing is some of the scenes are that were in Season 2 where I just got to sit there and bite my tongue as she speaks, and she’s in my house. These are wonderful scenes when I was reading it, when I was reading these scenes, I’m literally biting my tongue. And so I wanted to do that in the scene where I’m like, I’m literally chewing my tongue because I’m so pissed at what I have to go through. Even this season, it’s insane what Maghra does to me and what I have to go through and what he finds out. There’s one scene where I go, “Where is this? Where’s Paris? What do you mean? Who is this? Why is she put… What?” And this whole scene, this guy is just getting punched in the face over and over. And as a father, if that should happen, I’d be freaking out. Anyways, I love that it’s her. I love the way that this season ends, I’ll say that.