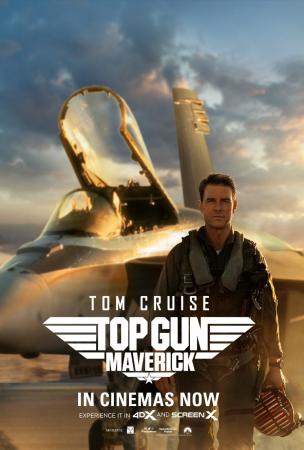 Nearly 36 years later, Pete “Maverick” Mitchell is returning to base in his historic role. Maverick is now a test pilot and is appointed to train a group of Top Gun graduates for a specialized mission, and he actively tries to avoid promotion to higher ranks that would stop him from flying.

Top Gun: Maverick has revived that movie magic and swept us off our feet, even more so than the 1986 film. Here’s a handy guide for you to know about how to watch Top Gun: Maverick, and when and where you can catch the smash hit sequel of the action-drama movie.

When Is Top Gun: Maverick’s Release Date?
The release of Top Gun: Maverick went through several back and forths. Originally, it was scheduled for a release on July 19 but was postponed due to production work delays. The movie was then set for a 2020 release, which also got pushed due to the COVID-19 pandemic and other scheduling issues. Finally, the movie premiered at CinemaCon in April 2022, followed by a global premiere in San Diego on May 4, 2022. The action-drama movie also got a screening at the Cannes Film Festival on May 18, 2022.

Top Gun: Maverick was finally released in theaters across the United States on May 27, 2022.

Is Top Gun: Maverick Streaming Online?
After months of waiting, while the film stays firmly seated in the box office top 5, Top Gun: Maverick is now available for purchase on-demand for $19.99 in UHD, HD, and SD. While some may want to wait to rent the film, trust us when we say the film is surely worth the purchase.

As for when the film will be available to stream on Paramount+, an exact date is unclear, while most Paramount films have a 45-day window from when they release in theaters til when they drop on Paramount+, Cruise’s control over the film and the fact that it is still selling plenty of tickets at the box office, have likely led to the studio holding off on a streaming service launch.

Is Top Gun: Maverick in Movie Theaters?
As a matter of fact, yes it is. As previously stated Top Gun: Maverick still is performing extremely well at the box office, so if you are one of the few who has yet to see the blockbuster on the big screen, or are in the need for a rewatch, be sure to check showtimes on the film’s official website.

Watch Top Gun: Maverick Trailer
The latest official trailer of Top Gun: Maverick is a high-octane ride across the endless sky with Pete Mitchell and his new batch of trainee pilots. Anything we say about the trailer would spoil the experience of watching it or even the movie for that matter. But all we’ll say is that it’s going to be an action-packed, dramatic sequel to the 1986 movie, with thrilling flying sequences, great narrative, and not to mention, a great performance by Cruise in his iconic role, as well as other cast members. The movie is also going to be nostalgic for fans of the original ones, seeing their favorite characters Maverick and Iceman return to the big screen after decades.

What Is Top Gun: Maverick About?
Top Gun: Maverick sees Maverick returning to TOPGUN, where he’ll be training a new unit of trainee fighter pilots. But he’s not doing this without a reason. The star pilot has been avoiding rising up the ranks so that he can keep flying, which is what he lives for. But going back to Top Gun also means facing his past, and some demons. This story is Maverick’s test of himself as a pilot, as a mentor, and most importantly as an individual.

What Is the Background of Top Gun: Maverick?
Top Gun: Maverick is dedicated to Tony Scott, director of Top Gun (1986), who passed away in 2021. The story of Top Gun: Maverick takes off more than three decades after the events of Top Gun. In the 1986 movie, Pete Mitchell is a young, hot-shot fighter pilot at TOPGUN, training with the best of best pilots. He’s skilled but a rebel and quickly earns his nickname, “Maverick”, which is going to stick with him for the rest of his life. His arrogance is both his vice and virtue. He keeps pushing himself but also ends up becoming overconfident which gets him into trouble. The movie ends with Maverick proving his merit but losing his best friend, Nick “Goose” Bradshaw.