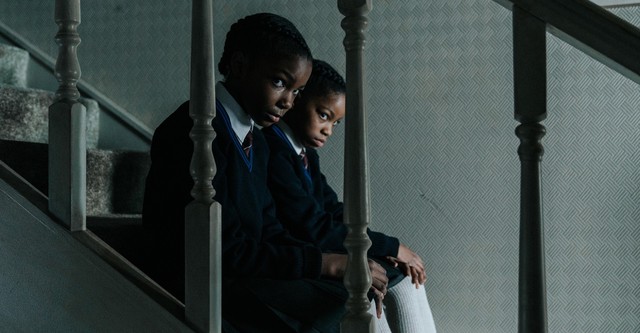 Two parrots, Polly and Perkins, are on display, locked away inside a gilded cage. A ring of spectators surrounds them, as if in a zoo, peering toward the birds in fascination. But the birds, distressed, have plucked out all of their feathers, leaving them naked and sallow.

This scene, carefully depicted with doll-like puppets, is one of a string of captivating stop-motion animation sequences in The Silent Twins, out Sept. 16. The biographical drama from director Agnieszka Smoczyńska tells the story of June and Jennifer Gibbons (played by Letitia Wright and Tamara Lawrance, respectively), who gradually stopped speaking to anyone other than each other—and even then only in private.

Later, in another imaginary scene, the titular twins sit smiling side by side at a book signing, each autographing copies of their respective novels, flourishing their pens with gusto. Behind them, two life-size parrot puppets sway contentedly—this time restored to a healthy purple hue. In real life, both twins were writers, and Polly and Perkins first appeared in one of Jennifer’s early stories.

Barbara Rupik spearheaded the stop-motion animation in the film. “This story is simultaneously charming and unsettling,” Rupik says in an email to TIME, referencing at once the whimsy and sorrow of two parrots brought up to live in a zoo. “Only through the eyes of imagination Polly and Perkins are able to open the cage’s door, a gateway to a fantasy world. It is, in a sense, their personification, an important allegory.”

Two lives turned toward one another
June and Jennifer were born in 1963 to Barbadian parents who raised the girls and their three siblings in the U.K.: first in England and then in Wales. In 1971, when the twins were eight, they started at a new school in southwest England.

“Eight or nine, we started suffering, and we stopped talking,” June told Hilton Als for the New Yorker in 1998, one of few interviews they gave. “People called us names—we were the only Black girls in school. Terrible names. They pulled our hair.”

In secondary school, the girls and their brother, David, experienced the same thing: they were once again the only Black students, and the racism and bullying only intensified. First, they retreated into themselves, then, as they got older, they began to experiment: with alcohol, drugs, boys, and eventually a string of petty crimes that escalated into arson. The twins served almost 12 years at Broadmoor, the infamous maximum-security hospital for the criminally insane. Jennifer died in 1993 and June lives a private life today.

As their story was shared in the press by investigative journalist Marjorie Wallace, curious onlookers came to know the twins as anomalies: the only Black students in predominantly white schools and, as the movie’s title emphasizes, uniquely silent. But as much as June and Jennifer Gibbons turned inward, they also stood out for what they created beyond themselves, an aspect of their lives The Silent Twins illuminates: they were naturally gifted artists.

“I was totally amazed at how mature they were, how full of imagination, how creative: deeply, deeply, deeply creative,” says Smoczyńska, the director, in an interview. “And from this moment, I knew that I wanted to tell much more about them, as artists who try to communicate with the outside world.”

An unparalleled body of creative work
The only publicly available work by either of the twins is June’s The Pepsi-Cola Addict—about a teenager from Malibu who drinks 300 cans of Pepsi-Cola every day—which is now available at just a handful of libraries around the world. But Smoczyńska dove into research, starting with Wallace’s 1986 book The Silent Twins, for which the author built deep relationships with the Gibbons girls.

Through Wallace, the director was able to access some of Jennifer’s drawings, letters from the twins to Wallace, diary entries, poetry, short stories, unpublished novels, and more. Smoczyńska invited her creative team—including Rupik, songwriter and composer Zuzanna Wronska and Marcin Macuk, and director of photography Jakub Kijowski—to study everything they could about the twins.

June and Jennifer—and their art—became the impetus for the style, tone, and genre of the movie, a psychological drama guided by the twins’ emotions. Everything came back to them.

The director was drawn to the juxtapositions within the twins’ similarities: To Smoczyńska, they were simultaneously mature and naïve, tender and funny, withdrawn from the outside world and immersed in their shared inner world. She found the bridge between the two worlds in stop-motion animation, and the architect of that bridge was Barbara Rupik, the animator.

Animating Jennifer and June’s imaginations
Rupik won third place for the Cinéfondation prize at the Cannes Film Festival in 2019 with her animated short The Little Soul. In an interview about the film, she said that one of her major goals “was to show repulsive matter in an attractive, mesmerizing way”—a sensibility that served her well in The Silent Twins. (Rupik told TIME she found many of the twins’ works to be “both unsettling and beautiful.”)

Before their literary pursuits, June and Jennifer indulged their imaginations by building entire families of dolls, complete with successive generations and complex family trees—a fact that Rupik loved.

“I think that in some sense the girls’ way of thinking, somewhere, is close to the way of thinking in animation—especially if we consider their play with dolls,” Rupik says. “At some point, the girls began to treat the handmade dolls as the characters in their stories, the handcrafted side of their work merged with the writing.”

The Silent Twins does the same thing, fusing animation with the twins’ artwork. One of Jennifer’s unpublished novels, The Pugilist—which Smoczyńska counts as her favorite—tells the tale of a physician, Dr. Pallenberg, who transplants the heart of the family dog into his son to keep him alive. To animate the story, Rupik combined fabrics, materials, and ready-made scaled props with organic, liquid matter. “As if these rag dolls were sweating and shedding tears,” she says, “and blood was flowing through their bodies”

“Of course, everything is somehow filtered through my imagination,” Rupik continues. “But I did my best to create worlds that would be a fusion of imagination and sensibility—mine and June’s and Jennifer’s.”

10 Slasher Movies Where Villains Appear Above

How to Watch Every Episode of ‘The Simpsons’ Treehouse of Horror