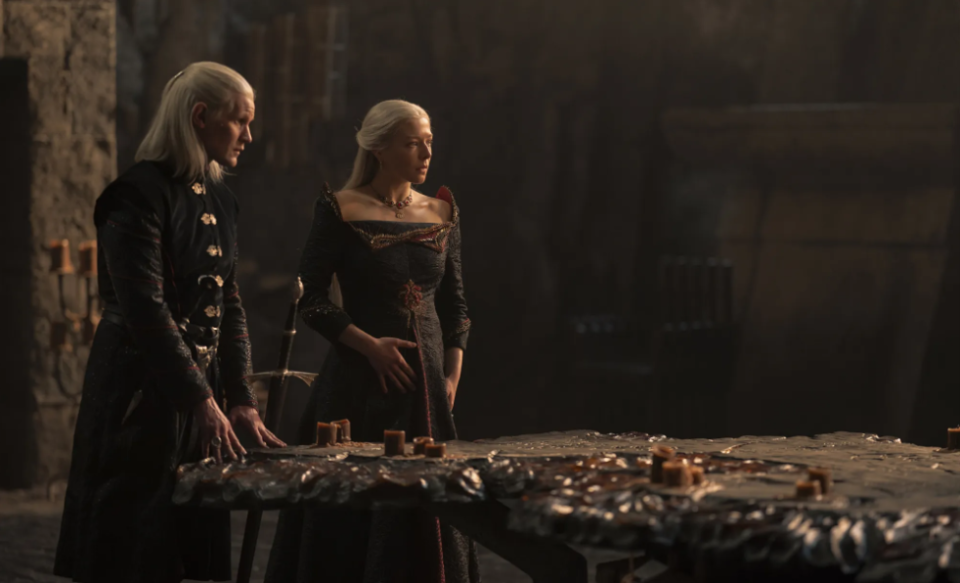 The series places its Black Queen on the board and reminds us that wars can also be declared by accident.

The end of a season doesn’t always mean the end of all conflict. As a matter of fact, most of the time, it means the mess has just begun. Unless you’re expecting a cancellation, the smart thing to do to make sure viewers will be once again glued to the couch one year after your season finale is to end the run with a good cliffhanger, like, for instance, a prince accidentally murdering another and starting a war both parties were desperate to avoid. At the end of a strangely uneventful episode, House of the Dragon topped it off with the gruesome death of Prince Lucerys (Elliot Grihault). The boy’s tragic demise is sure to heat up the cold war that Targaryens and Hightowers have been waging long before King Viserys’ (Paddy Considine) death. Alas, that is something that fans will have to wait at least about a year to see. In the meantime, they will have a lot of things to mull over, from House Velaryon’s uneasy relationship with Queen/Princess Rhaenyra (Emma D’Arcy) to Daemon’s (Matt Smith) role in his wife’s court to Queen Alicent’s true intentions towards her former childhood friend.

Let’s make one thing clear: it’s not that nothing happens in “The Black Queen”, but the action is considerably muted for the season finale of one of 2022’s biggest shows. In comparison to last week’s “The Green Council,” House of the Dragon’s tenth episode has a slower pace and focuses a lot more on what its characters have to say instead of what they do. Still, this doesn’t mean that there isn’t a whole lot going on in “The Black Queen.” The apparent minimalism of the episodes’ family chats and war room politics hide a lot of complexity. Sure, Lucerys’ murder by dragon at the end might’ve been shocking and intense, but for those that knew where to look, there was just as much thrill to be found in the details of the conversations taking place at Dragonstone.

The first place in which you should be looking for your weekly dose of Valyrian adrenaline is the eyes of Princess Rhaenys (Eve Best). After being detained at King’s Landing and all but forced to swear fealty to Aegon II (Tom Glynn-Carney), Rhaenys rescued her dragon and flew her all the way to Dragonstone. At the traditional seat of House Targaryen, Rhaenyra remains oblivious to her father’s death and still believes she will ascend to the throne once he passes. But Rhaenys is there to put an end to the alleged queen’s illusions. Rhaenyra is distraught to find out that Aegon has been crowned in front of the people of King’s Landing, and her husband, Daemon, is questioning Rhaenys’ motivations for fleeing the Red Keep instead of burning it to the ground. Rhaenys pretends not to hear the prince-consort’s accusatory questions, but she also avoids bending the knee to Rhaenyra right away. It’s a smart move, considering that she still believes the new queen might have murdered her son and that Daemon seems to have a pretty strong hold of the men serving at Dragonstone. Besides, the Sea Snake (Steve Toussaint) is sailing home, his health nearly back at 100%, and there’s no telling to whom Lord Corlys will promise Driftmark’s enormous fleet. As things develop around Rhaenyra, Rhaenys simply observes, and there’s a whole story being told in her eyes – the story of a mother and grandmother unsure of what is best for family, as well as the story of a stateswoman trying to figure out who is best suited to rule and protect the realm.

Rhaenyra isn’t off to a good start in her second cousin’s private race for Westeros’ next monarch. Sure, Aegon is a sadist and a drunkard who never wanted to be king, but, early on in the episode, it doesn’t even look like Rhaenyra is the one giving orders at her court. Pregnant with her third child by Daemon, the queen goes into premature labor upon hearing of her father’s death and her brother’s rise to the Iron Throne. As she struggles to give birth, Daemon takes control of the war council and gets ready to Dracarys the hell out of every single Hightower he meets along the way. Pretend you’re Rhaenys looking at things and pondering that the gray eminence on the other side will be either Queen Alicent or Lord Otto (Rhys Ifans), and, suddenly, it’s not hard to understand why a woman might be hesitant to declare allegiance to one monarch instead of the other.

But Aegon soon loses points after Rhaenyra gives birth to a stillborn child, whom she prepares for cremation with her own two hands, in an undeniable show of affection and emotional strength. In a matter of seconds, there she is, sitting at the table, commanding her men to find out who their allies are before making any sudden moves and to hold still until the other side attacks. Trigger-happy as he is, Daemon is more than unimpressed by his wife’s decisions and challenges her in public as if she was not the queen. He even assaults her at one point when she brings up Aegon the Conqueror’s prophecy that Viserys never told him about in the first place. Rhaenys, on the other hand, is pleased with what she sees. Laenor (John Macmilan) and Laena’s (Nana Blondell) deaths take a backseat to Rhaenyra’s wisdom and her attempts to keep the Seven Kingdoms at peace. Soon after Lord Corlys arrives back at Westeros, he has a heart-to-heart with his wife that ends up securing House Velaryon’s support for Rhaenyra. The Sea Snake also enters the war room with a hell of a plan to make sure the Greens will surrender: with the Stepstones now secure, they can place barriers all over the Narrow Sea and stop the food supply from reaching King’s Landing.

Lord Corlys and Princess Rhaenys aren’t the only surprise backers of Rhaenyra’s claim to the throne. Ser Arryk (Luke Tittensor) arrives at Dragonstone unexpectedly to offer his sword to the new queen after coming to the conclusion that Aegon isn’t fit to rule — you know, with his love for baby fights and such. But even with all that support, there are still some allies Rhaenyra must secure before going into a fully-fledged war, especially with Queen Alicent making all kinds of generous, yet offensive offers to keep things peaceful between both houses. (Who wants to be the lady of Dragonstone when they can be Lady of the Seven Kingdoms and Protector of the Realm, Alicent? Seriously!)

The main backers Rhaenyra wants behind her claim are the Arryns, the Tullys, and the Baratheons, all three houses to which she is connected by blood. And to make sure that they will have no choice but to stand by her side, she decides to contact them not via raven, but through direct messages delivered by her two oldest sons on dragonback. Not only will it be more personal, but it will also be more intimidating. Jacaerys (Harry Collett) is tasked with taking his dragon, Vermax, to the Vale and the Riverlands, while Lucerys is sent with Arrax to Storm’s End. That’s where Rhaenyra’s planning and Alicent’s peace offerings all go downhill at the same time.

Lord Borros Baratheon (Roger Evans) doesn’t care much for Rhaenyra’s reminder that his house has already sworn fealty to her. As a matter of fact, he is downright offended that the so-called queen didn’t even approach him with a marriage proposal for one of his daughters. The previous envoy, you see, came to him with a most advantageous offering for his eldest. Who is that envoy, you ask? Why, it’s Prince Aemond Targaryen (Ewan Mitchell), of course, who is still there, chatting with his bride-to-be when his nephew arrives. Still mourning his lost eye, he demands that Luke take off one of his own as payment for what he did. When Luke refuses, he takes off his sword, but Lord Borros puts an end to the fight before it begins and orders his knights to take the young princeling back to Arrax. They obey, but just as the dragon takes flight, guess who Lucerys sees behind him? Aemond, in flesh, blood, and rage.

Now, Storm’s End is, as you may have already guessed, stormy, and dragons are irrational creatures, no matter how much they can understand the songs of Old Valyria. During the chase, both Luke and Aemond lose control of their dragons. But while Arrax merely fails to go where his rider commands him, flying erratically across the sky, Vhagar goes a bit further and attacks her opponents. Lucerys and his mount are both chewed up, leaving behind a stunned Aemond — who clearly wasn’t expecting that to happen. It was an accident, but unfortunately, accidental declarations of war are still declarations of war. Whenever House of the Dragon returns, it’s pretty safe to say tensions will be running a lot higher. In the world-encompassing skirmish between the Greens and the Blacks, peace was never an option.