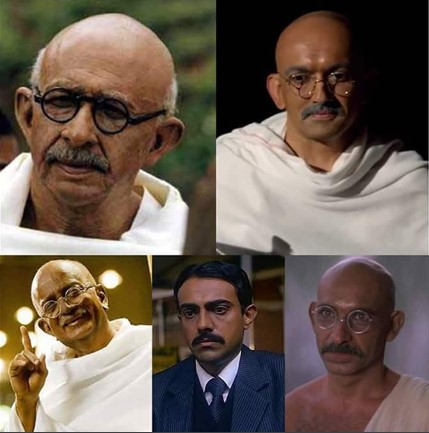 “A man is but the product of his thoughts. What he thinks, he becomes,” so said Mahatma Gandhi and even though he was talking about thought patterns that shape individuals, his ideals too have left an indelible imprint on mass consciousness and shaped it. Film-makers and playwrights have tirelessly documented his life and actors have gone to great lengths to become’ Gandhi. Here is our pick of five performances that we think have done complete justice to Bapu’s stature.

This definitive biopic of the Mahatma and Richard Attenborough directorial starred Ben Kingsley in an Oscar-winning role and on its release in 1982, became an instant global success. The film followed Gandhi’s journey from South Africa to India where he became a mass leader helming the non-violent, non-cooperative independence movement against the British Empire. Interestingly, Naseeruddin Shah had auditioned for this role as well but Kingsley got the part and prepared rigorously by reading over 28 books on Gandhi, losing a huge amount of weight and perfecting his Indian accent. The film received 11 nominations at the 55th Academy Awards and won eight including one for Bhanu Athaiya for her costume design.

The veteran actor finally got to play Gandhi in the 2000 Kamal Haasan-directorial ‘Hey Ram‘, a film about the futility of hate and violence. Even though the role was short, it was poignant and impactful as it shows how any crisis of faith between communities can be overcome through mutual trust and how only non-violence and not hate can transform people for the better. Interestingly, Bapu’s great-grandson Tushar Gandhi also appeared as himself in the film. ‘Hey Ram’ won three National Film Awards and was also screened at the 25th Toronto International Film Festival and at the 2000 Locarno Festival.

In this 1996 Shyam Benegal directorial, Rajit Kapur portrayed Gandhi during the 21 momentous years in South Africa that went on to shape him as a leader who would one day wield such moral power that the likes of Nelson Mandela and Martin Luther King Jr. would be inspired by him. ‘The Making of the Mahatma‘ based on Fatima Meer’s book, ‘The Apprenticeship of a Mahatma‘, won Rajit Kapur a National Award. It was also honoured with the National Award for Best Feature Film in English.

In Zee Theatre’s teleplay ‘Shobhayatra‘, Chirag Vohra plays Gandhi but with a difference. Written by Shafaat Khan, the play highlights the loss of idealism that won us our nation’s independence. It depicts a few citizens eager to join a ‘Shobhayatra’ dressed as Gandhi, Subhash Chandra Bose, Bal Gangadhar Tilak, Jawaharlal Nehru, Rani Laxmibai and Babu Genu but without really sharing the values of these icons. Chirag plays Gandhi and his most memorable dialogue in the play is, ‘Manav jaati ek nirnayak mod par aa pahunchi hai‘ (The human race has reached a decisive moment) which reminds the audience of how important it is to reconnect with values like non-violence, honesty, truth and courage. Filmed by Attar Singh Saini and directed for the stage by Ganesh Yadav, ‘Shobhayatra‘ will be aired on Gandhi Jayanti on Airtel Theatre and Dish TV & D2H Rangmanch.

In this 2006 Raju Hirani directorial, Dilip Prabhavalkar played Gandhi with a genial, witty warmth and won over the hearts of millions of filmgoers. The comedy starring Sanjay Dutt in the lead depicted how virtually any issue in life can be solved by the Gandhian credo of truth-telling, honesty, humanism, and non-violence. The key moment of the film comes when a goon begins to see Gandhi everywhere and then these interactions transform not just him, but the lives of all those he interacts with. The film won four National Film Awards.

PARAM- The ultimate exhibition of conception and creativity