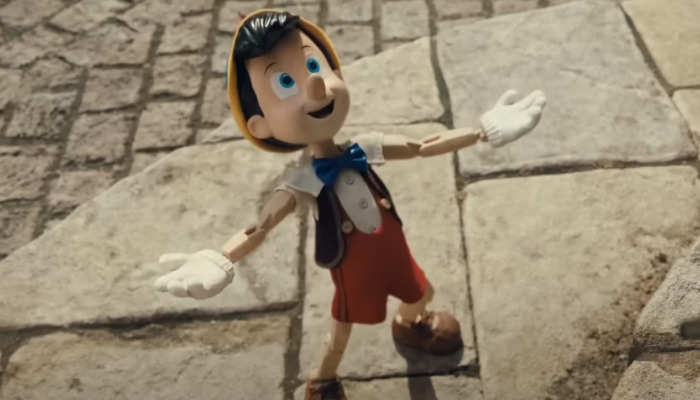 Tom Hanks stars as Geppetto in filmmaker Robert Zemeckis’s interesting new live-action movie version of the classic 1940 Disney cartoon, Pinocchio. While the movie suffers from an occasionally sluggish pace and being a bit too familiar, it will be appreciated by people who are coming to the material for the first time as it is handsomely produced with solid technical qualities and fine voice performances from Benjamin Evan Ainsworth as Pinocchio and the always reliable Joseph Gordon-Levitt as Pinocchio’s sidekick and the voice of reason, Jiminy Cricket.

It all starts as the lonely Geppetto creates a wooden puppet named Pinocchio. When the Blue Fairy (Cynthia Erivo) answers his wish which he –you guessed it– wishes upon a shining star for, the fairy makes the puppet come to life and although Geppetto would like his “son” to go to school, the poor young Pinocchio gets mixed up with a crowd of shady folks who make him think that being famous by being an entertainer will make him more successful than going to school.

Pinocchio gets caged up at one point and is able to escape because when he lies, his nose grows bigger with each lie which ultimately helps him get the key to the cage. Pinocchio ends up at “Treasure Island” with a bunch of real children in a very intriguing scene within the film where Pinocchio goes on some theme park type adventures complete with fireworks and a glass (or two) of root beer for our beloved character. This portion of the film is lively and colorful and is, of course, an excellent advertisement for going to Disney World. The kids eventually eat junk and make a mess of things which is symbolic of the need for order and conscientiousness in terms of doing the right thing in life whatever it may be. Pinocchio even shoots pool in the movie which is quite amusing to behold.

Meanwhile, Geppetto is trying to find Pinocchio alongside a bird named Sofia (voice of Lorraine Bracco). Jiminy Cricket (complete with his top hat and umbrella) is also looking for the beloved puppet boy to help restore order to his life. At one point, one of Pinocchio’s new friends becomes a donkey and anyone who has seen the classic cartoon knows that the themes of this story can run a little dark at times and that problem manifests itself here making the movie a children’s film which may requite adult supervision to help kids from becoming too frightened of what’s going on in the movie.

The supporting cast is mostly solid. Jaquita Ta’le stands out significantly and serves as Sabina, a puppet of a human puppeteer (a great Kyanne Lamaya) who befriends Pinocchio. This puppeteer makes Sabina dance with Pinocchio at a show for the public early on. Giuseppe Battiston adequately portrays a wicked man named Stromboli who is the one who initially takes Pinocchio against his will.

Zemeckis has always been a remarkable filmmaker but this time, he didn’t bring his “A game.” The later scenes seem to drag a bit and the key scenes inside a big whale aren’t as strong as they could have been. Nevertheless, the movie is strangely entertaining and one can’t help but watch it all the way through as the picture is definitely a curiosity piece just to see how everything will turn out at the end. Hanks turns in a finely rendered, if a bit underwhelming, performance for the fine actor but it is still a turn with a lot of heart making it a noble role for the distinguished actor. Gordon-Levitt is perfectly cast as the voice of Jiminy Cricket with the performer adding a lot of charm to the character in one of the actor’s most heartfelt roles to date.

Pinocchio is a sweet-natured and timeless story. It’s about love, family and the healing power of kindness. Although this particular version is far from the best remake of the source material, it proves to be serviceable entertainment to those who are fans of the old cartoon and this picture could find new admirers of the material thanks to the colorful look of the movie.You may just wish upon a star for what you want in life thanks to the magical feelings that this film embraces.