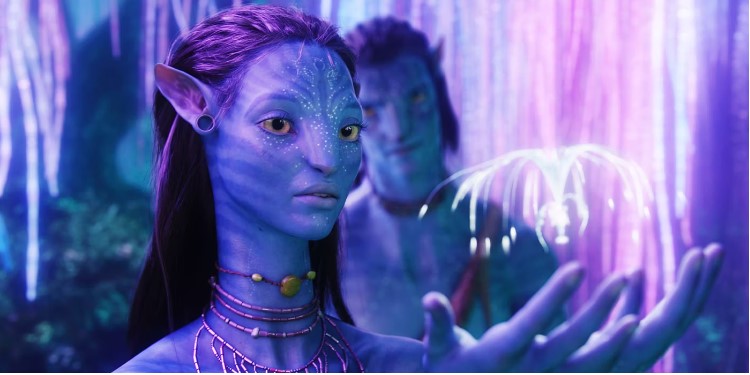 James Cameron’s Avatar returns to theaters this weekend with an extended run in IMAX. The film was recently removed from the Disney+ platform, generating even more anticipation for the theatrical re-release. Avatar’s box office success is basically a Hollywood legend at this point. Although Avengers: Endgame briefly stole its spot as the highest grossing film of all-time at the worldwide box office, Avatar won back its title thanks to a 2021 re-release. It’s unlikely that we will see a phenomenon like Avatar again anytime soon.

Any film that is so dominant within the film community is destined to be labeled as “overrated.” Did Avatar really deserve a Best Picture nomination at the Academy Awards, and is it really the best project that James Cameron has ever been involved with? While opinions on these questions may vary, one of the silliest arguments that has been made is that Avatar seemingly left no cultural footprint. The hype surrounding Avatar: The Way of Water should be enough to silence those criticisms all together.

‘Avatar’s Legacy is Greater Than Box Office Records
However, Avatar’s legacy is greater than its box office success and groundbreaking 3D filmmaking techniques. Avatar is the type of original science fiction film made on a massive scale that truly became a phenomenon; in an era dominated by previously established properties, comic book adaptations, and cinematic universes, the originality of Avatar cannot be discredited. Is it largely similar to Dances With Wolves and FernGully: The Last Rainforest? Perhaps, but then again, Star Wars has a lot in common with Flash Gordon and Buck Rogers. Even if you can track its influences, Avatar remixed different genres in a compelling way.

The idea of a standalone, big budget adventure film was unique in 2009, and in 2022, it’s basically an anomaly. Although Avatar obviously left the door wide open for sequels, it doesn’t go out of its way to tease the next chapter. Today, franchises like the MCU, the DC Universe, and the Star Wars franchise are mapped out many years into the future. It’s hard to get excited about Phase Four of the MCU when you know that Phases Five and Six are coming soon. Avatar wasn’t committing its audience to characters that they knew were set to appear in a sequel; it was a success because people were ecstatic about venturing into Pandora for the first time.

Relentlessly Sincere
Ironically, the criticism that Avatar is “melodramatic” is actually one of the film’s most notable attributes. Avatar is relentlessly sincere. Jake Sully (Sam Worthington) is a hero with a heart of gold, and genuinely learns to change his perspective on his service when he falls in love with Neytri (Zoe Saldana). Jake isn’t necessarily a complex guy, but he’s not the type of quippy, self-aware protagonist that we’ve become used to seeing. Cameron was literally giving the audience an “avatar;” he showed them the story of a disabled soldier that they could relate to.

One of the reasons that Avatar is so immersive is that the audience is getting to experience the same sense of wonder that Sully does as they venture into Pandora for the first time. Avatar is nearly three hours long, but the pacing doesn’t drag because the audience feels the same excitement as Sully about meeting the Na’vi, learning about their culture, exploring the wildlife, and experiencing the natural beauty of Pandora. The films that become box office sensations rely on these moments of astonishment, whether its Alan Grant (Sam Neill) seeing a dinosaur in Jurassic Park or Elliot (Henry Thomas) flying with his alien friend on a bike.

Emotion is Cameron’s secret weapon, and it’s why Titanic was such a phenomenon before Avatar. Even though Cameron will innovate technical wonders that cinema has never seen before, he isn’t afraid to show genuine moments of character growth. Avatar isn’t subversive, and that’s kind of the point. It’s exciting to see the hero’s journey placed in this new context. Seeing Sully grow genuinely shocked by the brutality of his own people and find acceptance in a new culture creates the fist-pumping moments that make the film’s third act so rewarding.

Avatar’s box office run was notable because of how long it managed to stay at the top of the weekend charts. We’ve seen a similar sensation this year with the record-breaking success of Top Gun: Maverick. Top Gun: Maverick shares a lot in common with Avatar. Both films celebrate living within the heat of the moment. The Top Guns show the same enthusiasm for their aerial combat training that Sully does for his new body. The gravity-defying flight sequences of Top Gun: Maverick and the astonishing worldbuilding of Avatar both rely on seeing the characters react in honest, relatable ways.

Tony Gilroy Sets Precedent For ‘Andor’ With ‘The Bourne Legacy’