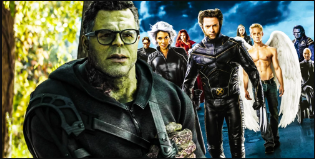 The introduction of the X-Men into the MCU will prove to be difficult, as Endgame and Phase 4 present problems for their civil rights story.

The eventual reveal of the X-Men in the MCU could turn out to be problematic, especially considering the impact that Avengers: Endgame and Phase 4 have had on the Marvel franchise. The X-Men’s presence in the comics as a powerful civil rights allegory presents conflicts with their MCU adaptation. Avoiding these issues could come with the cost of drastically different X-Men interpretations compared to their counterparts in other media.

Phase 4 has seen the MCU delve into deeper subject matter, which bodes well for the X-Men. The mental health backdrop of Moon Knight and the introspective examination of humanity in Eternals are promising developments that are more in line with the themes and tone of the X-Men. However, many of the entries in the MCU Phase 4 have set up an environment that doesn’t translate well for the introduction of the X-Men. Until the revelation at the end of Ms. Marvel, mutants have been missing from the MCU. Further, post-Endgame Marvel heroes have been cast in a largely positive light, and the presence of superhumans has been normalized and even welcomed at this point. This directly contrasts with how mutants are addressed in the X-Men comics, TV series, and films.

An integral factor in the characterization of the X-Men is the unjust and scornful treatment that they often receive. This discrimination is not only doled out by the general public but through legislature and figures of authority as well. Although superhumans have faced legislative consequences for their actions before in the MCU, these sanctions were arguably justified and for plausible causes. The difference with mutants is that they are unfairly persecuted, and the treatment they receive is often rooted in prejudice and misunderstanding as opposed to rationality. With society’s negative views of superhumans left relatively untouched in the MCU, much of the X-Men’s relevant social commentary may feel out of place. Although there may already be an advantage with the explanation of the X-Men’s mutant powers in the MCU, producers may struggle to incorporate the important civil rights allegories that address abnormality.

Dating back to their first comic appearance nearly 60 years ago in The X-Men #1, mutants have remained a powerful conduit for civil rights analogies. Society in the X-Men universe is often depicted condemning mutants for their differences, contrary to the MCU’s frequent celebration of diversity. An apt example of the exploration of this theme can be observed in X-Men: God Loves, Man Kills. Writer Chris Claremont and artist Brent Anderson helmed a visionary work in 1982 that would define portrayals of mutants for years to come. The story sees a mutant team up, with the X-Men working with frequent villain Magneto in an effort to combat anti-mutant sentiment. Reverend William Stryker leads a hate group known as the Purifiers. This group advocated for the extinction of mutantkind and asserted that mutants were an atrocity in the eyes of God.

Bryan Singer expertly weaves these bits of political intrigue into his first two X-Men films. The first film delves into the realistic implications of people coming to terms (or not) with a mutant presence in society. The seeds of human animosity towards mutants are planted, with an act put forth in the senate requiring mutants to be registered. These same themes are evident in the treatment of mutants in X2: X-Men United, a movie that was inspired by God Loves, Man Kills. Where the first film was more broadly focused on the integration of mutants into society, intimate aspects are covered in X2 such as familial relationships and the rejection that mutants often faced even from their own kind. This element of uncertainty and aggression plagues humans throughout the X-Men franchise. Mankind is often portrayed as socially ignorant, rejecting mutants as a result of their fear of the unknown. There is a lack of understanding between mankind and mutants that contributes to anti-mutant sentiment and hysteria.

The insertion of the X-Men in the MCU will be tricky, but producers should do their best to preserve the defining narrative theme of discrimination in Disney’s future X-Men movies. However, the dynamic of the MCU may need to be altered in order for these well-executed mutant arcs to endure. The stance of the public towards the MCU’s heroes is generally positive. Society has become desensitized to extraordinary beings and events. People have a superhuman soft spot for beings like Hulk, as they are treated as pseudo-celebrities. If mutants’ storylines are carried over, the public perception of superheroes presents a difficult situation, as the simultaneous acceptance and rejection of different groups of superhumans is illogical.

Although there have been instances of some hostility shown towards supes, as exhibited in The Falcon and The Winter Solider, a marquee event that would sway the stance of public opinion against super-powered people again is imperative for a successful X-Men introduction. This event would need to be cataclysmic, such as the disaster that prompted the Sokovia Accords which were intended as damage control for Earth’s Mightiest Heroes. Such an event could then turn the tide of public opinion back against powered people and lay a foundation for distrust toward mutants.

Adapting The X-Men Into The MCU Will Be Difficult

Another predicament that Marvel executives are faced with is the obvious fact that superheroes already exist in the MCU. More consequently, not only do they exist, but they are praised and heralded. This superhuman obsession is conveyed through events like AvengerCon in Ms. Marvel and the platform given to superpowered influencer Titania in She-Hulk: Attorney at Law. These factors make the establishment of a civil rights allegory for the X-Men nearly impossible unless there is a monumental shift in public opinion.

Further, there is a lack of genuine storytelling basis for the X-Men to exist in the MCU. Ms. Marvel’s mutant reveal was divisive, as the choice to retcon Kamala Khan’s powers was a bold jump. There are a few plausible explanations for the lack of mutant appearances in the MCU, however. Perhaps the vast majority of mutants are unaware of their powers, and they have only just begun to discover them, just as Kamala did. Alternatively, the X-Men could have been willingly concealing themselves from society. Given the history of their treatment by the public in other media, this decision to lurk in anonymity would be a logical one. With the MCU soon to enter the middle phase of The Multiverse Saga, perhaps a sensible setup could be composed involving mutant interdimensional travel. Regardless of how Marvel executives choose to handle the adaptation of the X-Men into the MCU, they won’t be short of challenges.

On the time best of Dancing Along with the Stars