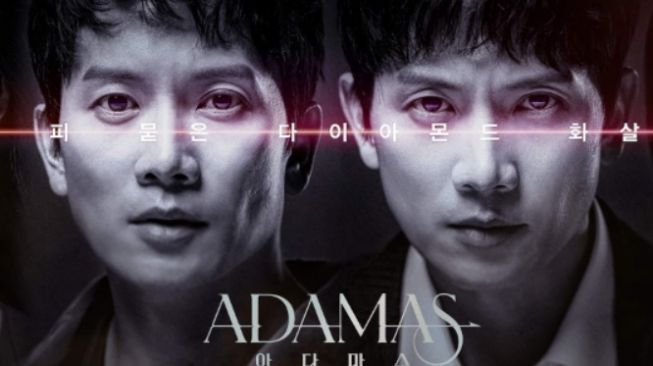 The latest Korean drama Adamas began airing in South Korea on July 27, 2022 yesterday. Check out the full synopsis with the show schedule.

The Adamas drama starred a number of well-known South Korean artists, such as Ji Sung, Seo Ji Hye, Lee Soo Kyung and other top actors. When is the Adamas drama airing, what day?

Drakor Adamas is 1 hour 10 minutes long, airing twice a week on Wednesdays and Thursdays. Adamas tells about the mystery of the death of the stepfather of a pair of twins named Ha Woo-Shin (Ji Sung) and Song Soo-Hyun (Ji Sung).

The stepfather of the twins is mysteriously murdered and with determination Ha Woo Shin and Song Soo Hyun grow up and have the ambition to find the perpetrators of the murder of their stepfather.

After growing up, Ha Woo Shin worked as a best-selling mystery novelist and Song Soo Hyun was a prosecutor at the central district prosecutor’s office.

Ha Woo Shin and Song Soo Hyun carefully investigate the truth behind the murder and they pursue the truth.

In the process of investigating the truth, they meet Eun Hye-Soo (Seo Ji-Hye) and Kim Seo-Hee (Lee Soo-Kyung).

Eun Hye-Soo is married to the eldest son of Haesong Group and she helps Ha Woo-Shin secretly.

Kim Seo-Hee is a reporter for local TNN news. He was a pious person and enthusiastic about his work.

He has a secret, which is related to the twin brothers Ha Woo-Shin and Song Soo-Hyun. What’s the continuation of the story like? Check out the full story in the Korean drama Adamas.