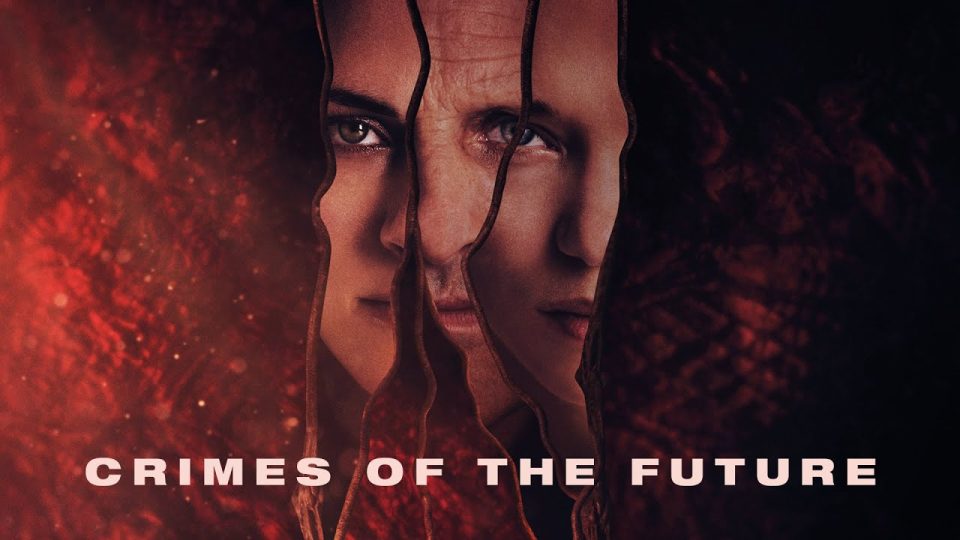 Crimes of the Future is a body horror/science fiction film written and directed by David Cronenberg, marking his return to both the genre as well as filmmaking, as it has been nearly eight years since his last movie, Maps to the Stars. With a hushed, aching baritone, Viggo Mortensen is equal parts victim and seeker in Crimes of the Future, portraying central protagonist Saul Tenser. The actor is no stranger to Cronenberg’s sensibilities, having made three feature films with the director before Crimes of the Future — A History of Violence, Eastern Promises and A Dangerous Method. Mortensen’s skill at fully embodying a given character doesn’t falter when he’s in Tenser’s dark, brooding cloak or covering up most of his face. Although much of his body is hidden almost at all times — further emphasizing his sense of detachment from most people — Mortensen conveys character through voice, eyes and subtle movements of his body.

His lover and creative partner, Caprice, played by Léa Seydoux, provides Tenser with a supportive, stable presence in his life but, much like Tenser, goes through her own metamorphosis throughout the story. The two are performance artists who publicly extract Tenser’s new, mutated bodily organs in live, conceptual settings. Before this is done, though, Caprice uses a special device (something reminiscent of the technology from the first Matrix) to tattoo her partner’s new growth — while it’s still inside of him. It’s a graphic, at times gory, character-driven movie with a very specific vision of an unfortunately possible future where devastating changes to the environment have led to unexpected, uncontrollable changes in human physiology. Tenser and Caprice are two people among many caught up in a world obsessed with surgery and the physical, external self.

The special effects work that makes up a significant chunk of Crimes of the Future, with flower-like, futuristic sleeping chambers, bone-shaped eating chairs and pod-like surgical beds that all appear more alive and fluid than technical or artificial, contain powerful echoes of H.R. Giger’s Alien designs. There are also hints of the moist, organic forms created by Rob Bottin for John Carpenter’s The Thing, another piece of science fiction horror from around the same time that Cronenberg released many of his now-classic films. But the creations in Crimes of the Future are very much their own, representing a continuously-evolving segment of the director’s decades-long output. Long-time collaborator, production designer Carol Spier, was responsible for the porous, craggy hardware in Crimes of the Future, making it a part of the story in specific ways. For instance, the company that makes, sells and repairs the equipment Tenser needs sends two mercurial emissaries who are revealed to have a hidden, violent agenda.

With this being his 22nd film, there are multiple examples of visual and thematic links between Crimes of the Future and his past work. Movies like Videodrome, Scanners and The Fly, in particular, resonate to a strong degree in Crimes of the Future. Especially apparent in Cronenberg’s sci-fi/horror films are the concepts of clandestine organizations at war with each other, bodily change or mutation, repressed desires and the various ways through which control is exerted over others. All of this is revisited in Crimes of the Future in strong, concrete ways. And while it’s true that Cronenberg repeatedly returns to the same ideas many times over, there is always a sense of progression — like he’s carefully reevaluating the things that interest (or haunt) him. There are smaller pieces of connective tissue, too — like a surgical console that bares more than a passing resemblance to the fleshy, bug-like typewriters in Naked Lunch. However, none of this feels self-referential or sentimental; on the contrary, it all comes with a deliberate effort to tell this one specific story.

RELATED:
Titane Is 2021’S Body Horror Standout – With A Twist

Cronenberg’s Creative Evolution Works to Strengthen His New Sci-Fi Thriller
The cold, detached sense of mise en scène in Crimes of the Future makes it feel fresh, crisp and new, especially when compared to modern horror that frequently opts for cheap scares and buckets of blood instead of taking the time to develop characters or a lasting sense of atmosphere and space. Even if the script had been in creative gestation since the ’90s, it feels extremely pertinent today. This is partly due to Cronenberg’s maturation as an artist as well as his impressive restraint. These two attributes, when applied to the subject matter and chosen style, make the scary moments truly jarring and lasting; they also help the body horror elements feel deserved and crucial to what the characters are going through.

Running under two hours, Crimes of the Future feels brisk and direct, even with its long, steady (gorgeous) takes. It puts the emphasis on character, thereby making the shocking, violent parts stick and mean something. The story, while primarily focusing on Tenser’s emotional and philosophical changes (as well as his overtly physical ones), also takes time to develop Caprice and a handful of other characters, like Kristen Stewart’s Timlin, an investigator with the fictitious National Organ Registry. Timlin appears sparsely throughout Crimes of the Future but quickly develops an overwhelming interest in Tenser, at one point revealing her intense attraction to him. Treating all of the characters as individuals makes the overall experience stronger and easier to follow, at least on an emotional level — even if the plot may be hard to grasp at first or the graphic imagery a little off-putting. Crimes of the Future takes its time, making every shock count.

Delaware Series LLC – How is it Useful?