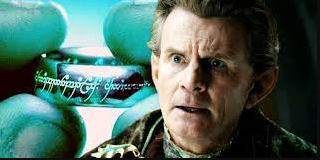 The Lord of the Rings: The Rings of Power answers a long-held question regarding the nature of Sauron’s One Ring – all thanks to Celebrimbor.

One Ring in Lord of the Rings and Charles Edwards as Celebrimbor in Rings of Power
An old The Lord of the Rings question is finally answered by Amazon’s The Rings of Power season 1 finale. Even those with only a passing knowledge of fantasy pop culture know The Lord of the Rings concerns an evil villain who creates a magic ring to dominate the fictional land of Middle-earth. The Dark Lord Sauron pours all of his dark knowledge into the One Ring, as well as his very life force, plotting to corrupt those wearing the lesser Rings of Power he forged earlier. The plan almost works, but proves more trouble than it’s worth when the Ring falls into Hobbit hands. Sauron’s plan has always inspired one question: why rings? Why didn’t Middle-earth’s scourge create the Necklaces of Power, or the Swords of Power, or the Eyebrow Studs of Power?

The Rings of Power season 1’s finale answers that question through the tainted wisdom of Charles Edwards’ Celebrimbor. Episode 8 (“Alloyed”) begins with Celebrimbor, Galadriel, Elrond and Gil-galad discussing the forging of a mithril object that will preserve the Elves’ light from fading. Celebrimbor’s first thought was seemingly a giant orb, before later realizing the mithril object must be carried. As Galadriel ponders a sword and Elrond suggests a scepter, the master-smith of Eregion notes that a circular form would be ideal, because the light within the mithril would arc upon itself to create an endless loop of resonating power. Once Halbrand (a disguised Sauron) becomes involved, the team realizes such awesome magic must be split, and thus the container should be smaller than a crown. A ring becomes the obvious solution – easily carried, minute enough to spare the scarce materials, round to amplify its power.

Why The Ring’s Shape Matters For LOTR

In designing the Rings of Power to be rings, Celebrimbor unknowingly gives Middle-earth a glimmer of hope in the fight against Sauron, who presumably had no choice but to model his Ruling Ring in their image. As a small and easy-to-remove trinket, Isildur had a simpler time liberating the One Ring from Sauron’s hand than if the weapon were something heavier, or worn somewhere less accessible than the fingers. The Ring’s diminutive shape then allows it to remain elusive throughout most of the Third Age, falling from Isildur’s grasp and going utterly unnoticed until Sméagol, who did a pretty good job of hiding it himself. The same then goes for Bilbo Baggins keeping the Ring in his pocket, then obscured in Bad End. Had the Ring been a sword, scepter, or even a crown, Sauron’s prize would’ve likely been discovered much sooner, and potentially brought Middle-earth to ruin long before Sméagol’s fateful fishing trip.

Most important of all, Celebrimbor and Halbrand’s decision to craft Rings of Power makes Frodo’s task infinitely easier in The Lord of the Rings. The One Ring proved burdensome enough for Frodo and Sam as they dragged themselves across Mordor’s mountainous landscape. Imagine if the two undersized hobbits were forced to lug around a full-sized Elven sword instead, as per Galadriel’s suggestion.

Amazon’s The Rings of Power revealing why the Rings were made specifically as rings is just the latest example of a trend that has run throughout season 1: explaining aspects of The Lord of the Rings that audiences hadn’t necessarily considered beforehand. Across this first 8-part run, The Rings of Power has revealed how Mordor became Mordor, that Tar-Palantir could predict the future because he possessed a palantír, that mithril was discovered through singing, how the Harfoots remained largely hidden until the Third Age, and that the friendship between Eregion and Moria began with Elrond and Durin IV.

Regarding the Rings of Power specifically, episode 8 fills in a slew of backstory chunks left by The Lord of the Rings. We now know Celebrimbor initially sought to create Middle-earth’s version of the Silmarils, and that the Elves ignored the Rings of Power’s risks because they’d die otherwise. The Elven Rings’ gold and silver is an alloy to eke out the mithril, the three gemstones were sourced by Celebrimbor beforehand, and the mithril was a symbol of Elrond’s friendship with the Dwarves. The Rings of Power has addressed almost every possible question surrounding the origin of its namesakes. read more: One Piece Film: Red (2022) watch free now