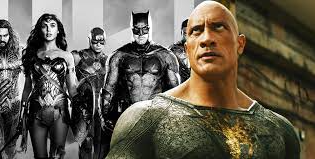 The release and re-edit of a recent Black Adam trailer have caused some controversy, highlighting DC’s difficult Justice League position.

Some controversy has surrounded a recent Black Adam trailer, which only highlights DC’s Justice League challenge. In recent years, the DCEU has had an identity crisis, with the franchise lacking a consistent direction. With the fanbase split and the future of the DCEU uncertain, DC is in a difficult position – and the Black Adam controversy proves it worse.

From its debut, Zack Snyder was meant to helm the DCEU after it was tied to his movie Man of Steel. His next film, Batman v Superman: Dawn of Justice, was received poorly by critics and general audiences, causing DC to want to take a different direction. DC brought on Joss Whedon to finish Justice League after Zack Snyder left due to personal reasons, but instead of completing Snyder’s vision, Whedon took a wildly different course. Justice League went through extensive reshoots and severe cuts, with Joss Whedon’s Justice League being released in 2017 to even worse reception than Batman v Superman. After an extensive fan campaign, DC allowed Snyder to complete his vision, releasing Zack Snyder’s Justice League (a 4-hour-long director’s cut) in 2021, which audiences and critics saw as a great improvement. However, Whedon’s version of Justice League is currently considered canon to the DCEU, and with a continuing movement to #RestoreTheSnyderverse, DC has some major choices to make in the near future.

Black Adam is the next film in the DCEU, starring Dwayne “The Rock” Johnson as the titular villain-turned-hero. The film has caused controversy because Warner Bros has removed footage of Joss Whedon’s Justice League from a Black Adam trailer that highlighted the biggest moments from the DCEU. The shot in question was of Steppenwolf swinging his weapon into the ground, with Darkseid being the one to do this in the Snyder Cut. Although The Rock released a “corrected” version on Twitter, the updated trailer simply removes the shot rather than replacing it with the Zack Snyder’s Justice League version. This choice doubles down on the fact that the Snyderverse isn’t canon to the DCEU, causing many to wonder how DC will clean up the mess they’ve created.

The DCEU Needs To Leave Joss Whedon’s Justice League Behind

The DCEU will probably never make Zack Snyder’s Justice League canon to the DCEU – and some of the reasons are valid. While the Snyder Cut is a stronger entry than Whedon’s version, Zack Snyder’s vision has already failed DC in the past with Batman v Superman, and they don’t want to risk that happening again. Furthermore, while the Snyderverse does have an audience, it’s not certain that the audience is big enough to support a cinematic universe. The #RestoreTheSnyderVerse movement is loud, but it’s impossible to gauge exactly how big it truly is. The DCEU has found recent success in more independent DCEU films like Shazam! and The Suicide Squad, and shifting directions back to their original plan (which already failed once) in order to appease an audience of an undetermined size simply isn’t a risk Warner Bros. wants to take. While it might be great for Zack Snyder’s Justice League to become canon, it will probably never happen.

What Will The Justice League’s DCEU Future Be? Whedon, Snyder, Or Reboot?

Justice League’s DCEU future has three options: keep the Whedon Cut canon, make the Snyder Cut canon, or just reboot everything – and it seems like the third option is the direction DC is headed in. With rumors that The Flash will reboot the DCEU’s continuity, DC seems to be shifting towards the DCEU being a series of loosely connected films that aren’t really building up to anything. Although Ben Affleck will reprise his role as Batman in Aquaman and the Lost Kingdom, major players like Henry Cavill and Ray Fisher will probably never return to the franchise. On top of that, there are no known Justice League sequels in active development, meaning that the universe going through a soft reboot is likely. It seems that the DCEU will mostly ignore the events of Justice League, instead building up a cast of new characters that could make up a potential team – and Black Adam’s Justice Society of America may be the first step in this direction. note: Peter von Kant (2022) Kostenlos online anschauen HD