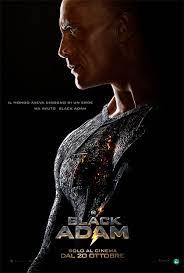 Storied rivals Black Adam and Shazam! go another round & this time, Dwayne Johnson’s anti-hero coming out on top of box office projections.

Black Adam is projected to beat Shazam!’s box office, according to new projections. Starring Zachary Levi as Billy Batson (also played by Asher Angel), Shazam! was released in April 2019. The film offered a lighter entry to the DC Extended Universe, its focus on family and teen superhero comedy meshing well with the dark sides of the villainous Dr. Sivana (Mark Strong). Providing a shift in the DCEU’s film fare in terms of tone and the focus on an isolated hero rather than an extended universe, Shazam! almost featured the titular hero’s longtime DC Comics nemesis, Black Adam.

Black Adam star Dwayne Johnson was the one who originally convinced Warner Bros. to give his character a chance to shine outside of Billy Batson’s on-screen debut, paving the way for the next DCEU project to be made. The titular character Teth-Adam will instead take center stage in his DCEU debut, as Black Adam explores his background as a Kahndaq slave who acquires powers similar to Shazam’s and uses them to fight for his home. Johnson has previously teased Black Adam as a film that will bring huge changes to the DCEU, hinting at the film’s scale. As one of the longest-developed DCEU films, fans are eager to see if Black Adam will be worth the hype as well as the wait.

Black Adam Can Make Superman Weaker In The DCEU

According to a recent report from Variety, predictive data from their intelligence platform is showing an impressive predicted turnout for Black Adam, with a projected $328 million haul. The report puts Black Adam third in terms of upcoming box office releases, with only hugely anticipated sequels Avatar: The Way of Water and Black Panther: Wakanda Forever before it. By comparison to the DCEU’s last solo origin story film, Black Adam is set to more than double Shazam!’s $159.1 million debut when it comes out on October 21, even more impressive when considering 2022’s lower box office numbers compared to 2019.

The draw of pop culture juggernaut Johnson likely goes a long way in Black Adam’s projected success, as does the marketing of this film as a game-changer for the DCEU. With a complicated history and muddled present considering the recent Flash and Batgirl controversies, the predictions of a $328 million gross are promising when it comes to the DCEU’s future. With a more serious and gritty tone, real political implications (as described by star Mohammed Amer), and focus on a morally gray anti-hero rather than a black-and-white heroic figure, Black Adam is a very different project from Shazam!. Based on these early box office projections, it’s possible that the DCEU will take note and lean more heavily into stories of anti-heroes as it continues to expand, and perhaps even place Johnson’s character in a position of leadership in the larger DCEU.

Though Black Adam and Shazam! both seem to follow the route of standalone origin stories, it’s possible that Shazam! The Fury Of The Gods will see the titular hero move on from his beginnings and assume a new role in the DCEU. Due to both Black Adam and the Shazam! sequel coming out this year, it’s possible the characters’ storied connections will be teased in one of the coming projects. Based on the makeup of the DCEU’s upcoming slate of films, which have a minimal focus on team-ups or crossovers, it will be interesting to see whether the two storied rivals will interact on-screen sometime soon, especially if Black Adam’s success supports the larger franchise Johnson has teased.

Where the Crawdads Sing movie review: Effective as a story about loneliness and love