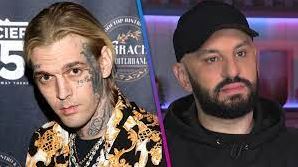 Aaron Carter’s friend is speaking out in the wake of his death. ET’s Kevin Frazier spoke with Gary Madatyan, Carter’s friend of more than a decade, and he opened up about what he saw when he arrived at the late singer’s home on Saturday following Carter’s death. ET has reached out to Carter’s manager for comment.

“When I got there, the house was completely closed. We couldn’t get into the house. The police were doing the investigation and the body was still in the house,” Madatyan told ET about arriving at the house with Carter’s ex, Melanie Martin. “After they removed the body from the house, they allowed just a few people to get into the house. We just wanted to go in there and see if any blood or any alcohol or anything was in the house.” “I went to his bedroom, the bedroom was normal,” he continued. “I went to the bathroom where the bathtub was full of water, like, yellowish color.”Madatyan also claimed that he saw aerosol cans in Carter’s home, and alleged that the singer had been huffing them, though Madatyan never witnessed it in person.

“There was a time he was doing it on Instagram. As soon as I saw it, me and Melanie, we got in on a text message saying, ‘This is bad. This is not good.’ We were very worried about him,” he said. “… It was really bad… He looked terrible. He lost so much weight. He was not acting normal. His mind was not there… I heard he’s taking a lot of medication, not specifically illegal drugs, but he was on a lot of medication.”As for what he believes happened, Madatyan speculated, “I personally think he was on medication and had fallen asleep in a bathtub… I think it’s a tragic accident, because he loved life. He had so many plans. Even though he had mental issues, addiction, he loved life.”

According to Madatyan, it was only him and Martin at Carter’s home that day. “When I got there, the day the incident happened, there were no friends with him,” he said. “… That’s why it’s kind of concerning me what happened. What was going on the day before? We need to find out.”In the weeks leading up to Carter’s death, Madatyan claimed he was “really struggling” with his sister, Leslie Carter’s, 2012 death, while also dealing with reportedly being estranged from much his family and ongoing custody issues surrounding his and Martin’s almost 1-year-old son, Prince.

“I think he was doing OK until this child custody case came in,” Madatyan said. “He was very heartbroken that he couldn’t see his child and had a lot of meetings with his attorneys.”On top of all of that, Madatyan claimed, Carter, who had been diagnosed with multiple personality disorder, schizophrenia, acute anxiety and manic depression, was also struggling financially”It was really bad. He couldn’t manage his money. There was nobody there to manage his money,” he claimed. “… He was financially doing really bad, very bad… He needed someone to be there for him.”Given all of that, Madatyan said he tried to encourage Carter to get help.”We had a conversation together. He said, ‘What do you want me to do?’ I said, ‘Can we please check you into rehab?’… He goes, ‘OK, I’ll do it. Just give me a week and I’ll do it. Give me two weeks and I’ll do it.’ It never happened,” Madatyan said. “… I think the mental illness he has and the addiction he had I think was controlling his life. Aaron also was very lonely person in his mind.”

If Madatyan could tell Carter one thing today, he said it’d be this: “I love you and I will always be by his son’s side. I will always do my best for him, to give him the most beautiful childhood… I will do everything for him in this world to make him happy.”

10 Underrated Horror Movie Villains Who Deserve Their Own Franchise