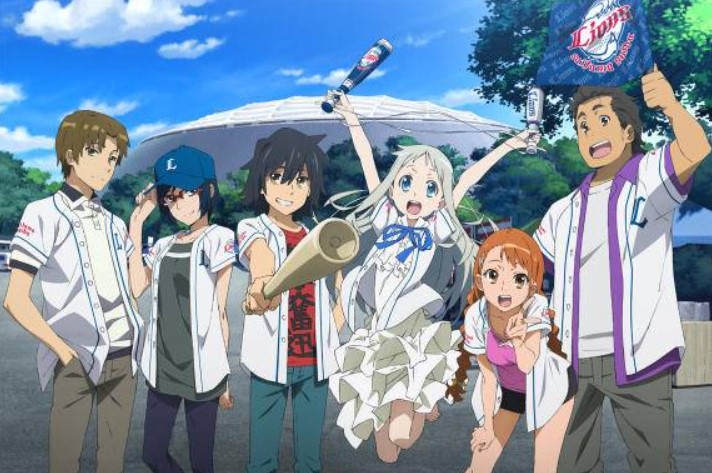 Ano hi Mita Hana no Namae wo Bokutachi wa Mada Shiranai (Anohana) is an anime series that aired in 2011. This anime tells the story of Jinta Yadomi who always spends time playing video games without ever intending to go to school. One summer day, he is suddenly visited by the spirit of Meiko Honma—his childhood friend better known as Menma—who begs him to grant a forgotten wish. At first, he ignores Menma’s presence because he thinks that Menma is just an imagination.

Gradually, Jinta begins to believe that Menma is not just an imagination. He also contacted all his childhood friends to ask for help to help. It’s not easy because their friendship has been strained since Menma’s death, even they are always overshadowed by feelings of guilt and misunderstandings that occur between them.

Until an incident happened, another friend began to believe in Jinta even though he couldn’t see Menma’s spirit. They were determined to help Menma to rest in peace in the right place. In addition to the touching story of friendship, there are many moral messages in the Anohana anime that you can take while watching this anime. What kind of moral message is that, huh?

1. Don’t listen too much to other people’s opinions

In this world, it seems less if no one is commenting on other people’s lives. You must have felt that way, right? There’s nothing wrong with listening to what other people have to say about you. However, it can also make you feel frustrated, unable to even move forward to continue what you are doing.

It’s okay to hear other people think about you every now and then, but not too often. Maybe not all opinions about you are good or pleasing to you. There are some opinions that can actually make you mentally ‘broken’ if you continue to be trapped in other people’s speculations. If you are doing something or are living life, keep going. Don’t pay attention to all the words that can hinder your journey, because the person who truly understands you is yourself.

2. Never wait for tomorrow if you can do it today

“I thought I could apologize tomorrow, but that tomorrow… never came.” — Jinta Yadomi.

If you want to do something, you should do it right away. Never wait for tomorrow, let alone try to procrastinate because you think that you still have plenty of time. If you really think that way, I think you should change your mind immediately.

Again, never wait for tomorrow because no one knows how tomorrow will turn out. Do you still have tomorrow? Can other people who you think have tomorrow really can still enjoy the day? No one knows. Therefore, never delay anything. Hurry up to do whatever you want to do before it’s really too late, or you’ll regret it.

3. There’s nothing wrong with thinking about yourself every now and then

“You always worry about other people. Think about yourself more!” — Jinta Yadomi.

In this world, there are so many good people, one of whom is a person who always puts others before himself. Are you one of those people? If it’s true, you’re not wrong, you really are good people.

However, you also need to pay attention to yourself. If no one is worrying about you, shouldn’t you do that yourself? There is nothing wrong if we also worry about ourselves. There’s nothing wrong with wanting to put yourself first, because you need to do it every now and then.

4. Never force your will on others

“Are you okay with him disappearing even though you love him so much?” — Naruto Anjou.

Loss or departure is always a shadow of life. If someone wants to walk away from you, just say so if it’s for the best. You may have felt very anxious to hold someone to always be by your side. However, why do you do that if someone you ‘hold’ will only get hurt, maybe even he really really wants to leave for some reason? Doesn’t it hurt even more?

However, you will not be able to impose your will or desires on others. Everyone has their own choice. So, don’t ever do that because it’s not good if you continue to idolize the ego. Try to accept both fate and circumstances!

5. Fall in love or not, it’s confusing, it’s better to do something else that is more useful

The brain is very complicated, so is the heart. The two of them are always enemies, have often opposing desires, even to get them together is almost impossible. One has to give in. Right?

Have you ever imagined someone in your mind? If it is, try to get rid of it. It’s not good, you know, if you leave it for too long because you can waste time. There are many things, besides love, to be worked on. If you keep yourself busy with other things, gradually the person who is always shadowing you will disappear on their own, really. Don’t be enslaved by someone who doesn’t necessarily think of you. Better to do something more useful.

6. It’s not good to suddenly disappear

“Farewell is not a one-sided affair!” — Tetsudo Hisakawa.

Nowadays, news of separation is often heard without saying a word, and some even call this behavior as ghosting. It was really painful and very very upsetting. Come with greetings, time to leave without saying goodbye?

If you have ever felt that way, you should not do that to other people because a relationship involves two or more parties. So, separation should be like that, not even a one-sided affair. Even in the rules of visiting, there are always greetings during meetings and farewells, right? Can’t just play away. Therefore, you should follow these rules if you really know what ethics is.

7. It’s natural for people to change.

“Everyone changes. That’s not it. The person who changes the most is me.” — Jinta Yadomi.

In this world, there are many changes from time to time, from the dry season to the rainy season. The rocky shores of the river are slowly weathering. Fallen leaves. A group of clouds that always walk slowly. It is certain that all things in this world are changing little by little, including humans.

If you find someone you used to really know, but are very different now. Never blame him just because he became someone you don’t know. It’s only natural because everyone will change. I don’t know if it’s because of how harsh things are or if it’s growth hormone.

Instead of looking at other people, try to look at yourself. Something must have changed in you, right? Whether your face is getting older, your height is increasing, maybe even your character or personality is changing for the better. Change is a natural thing. So, never blame others for the changes he has, okay?

Those are some moral messages in the Anohana anime that you can use as lessons in life. If you haven’t watched the anime Ano hi Mita Hana no Namae wo Bokutachi wa Mada Shiranai, you should watch it because there are so many life lessons in it. However, don’t forget to prepare tissues too, okay?

‘Beyond the Black Rainbow’ Is Panos Cosmatos’ Psychedelic Prelude to ‘Mandy’