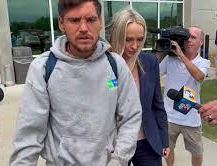 FORT SMITH, Ark. — Three Arkansas law enforcement officers were suspended on Sunday over a video that showed two deputies and an officer striking a suspect under arrest.

The video, widely circulated on social media, shows three law enforcement officers on top of a man under arrest punching him in the head and kneeing him several times. An officer points at the person recording the video, ordering her to stop videotaping.

Crawford County Sheriff Jimmy Damante issued a statement Sunday evening, stating two county deputies will be suspended during the course of the Arkansas state police’s investigation into the incident and the sheriff’s office’s internal investigation. A Mulberry police officer also was suspended.

“I hold all my employees accountable for their actions and will take appropriate measures in this matter,” Damante said.

In a statement released Sunday evening, Mulberry Police Chief Shannon Gregory said the officer involved in the incident is on leave pending the outcome of the investigation.

“The city of Mulberry and the Mulberry police department takes these investigations very seriously,” Gregory said.

According to police, a report indicated that a man was making threats to a convenience store employee in Mulberry, Arkansas, on Sunday morning. Mulberry is located about 137 miles northwest of Little Rock.

Worcester was taken to an area hospital for examination and treatment, then he was later booked at the Crawford County Jail in Van Buren, Arkansas, state police said.

Arkansas Gov. Asa Hutchinson commented on the video in a tweet Sunday.

“I have spoken with Col. Bill Bryant of the Arkansas State Police, and the local arrest incident in Crawford County will be investigated pursuant to the video evidence and the request of the prosecuting attorney,” Hutchinson said on Twitter.

Here are the latest released films: