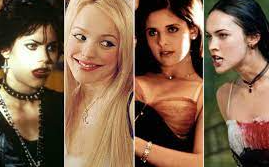 Some are smart and conniving, some as dumb as a bag of hammers. Some are literally evil, some just high school evil. Regardless, they all share three things: they’re girls, they’re mean, and they go to high school. Join us as we count down the 27 meanest high school girls in the movies…

Even after seven seasons playing the First Lady in The West Wing, Stockard Channing is still best known as spunky Rizzo, the girl with an acid tongue and a quick, if not always intelligible, comeback for everything (“Peachy keen jellybean” being a personal favorite).

Rizzo hardly made newcomer Sandy feel welcome at Rydell High, mocking her ingénue attitudes and virginity with typical mean girl aplomb. We find out in song form however that the pink lady behind the dark glasses isn’t really bad at heart, hence Rizzo coming in at a not-very-mean number 27 on this list.

Sample line: “I’ve got so many hickies people will think I’m a leper.”

Meanest moment: Parading acne-pitted Scorpion leader Leo around at the school dance under poor stupid Kenickie’s nose. Though, on balance, we suppose there are worse things she could do.

Sample line: “We need to save our show from people who don’t know the difference between a Tony Award and Tony Hawk.”

Sample line: “You will never be a racer, because you’re a glitch, and that’s all you’ll ever be.”

Meanest moment: Unquestionably the horrible moment that she and her cronies destroy Vanellope’s home-made racer and tell her she’s not allowed to race with them on account of her glitchiness.

Jody (Jessica Barden) is clearly the alpha in the friendship, and it’s her meddling (and Fatal Attraction-style obsession with rock drummer Ben Sergeant) that drives the film’s gentle rom-com plot forward. From her west country twang to her way with words, we’re not afraid to say that Jody Long is one mean girl we love.

Sample line: “I want to be her, in that dress, with him licking my teapot lids”

Meanest moment: Some light breaking and entering, then sending a – how should we put this – frank email invitation to Tamara’s lusty married admirer and ex-boyfriends which gets the writer some unwanted attention.

Of course, even eczematous pyromaniac Jordana is no match for the ego of her boyfriend narrator Oliver Tate, whose self-involvement is practically a pathology. Underneath the red duffle coat, Jordana’s just an ordinary girl with family problems whose boyfriend’s a bit of a wanker.

Meanest moment: She’s pretty badass as a Swansea femme fatale blackmailing Oliver under the bridge, but joyfully bullying Zoe Preece until she leaves school has to top her list.

Meanest moment: Throwing Nick’s painstakingly prepared mix CDs away is probably Tris at her most heartless, though her sexy dance in a riverside car park is her at her most scheming.