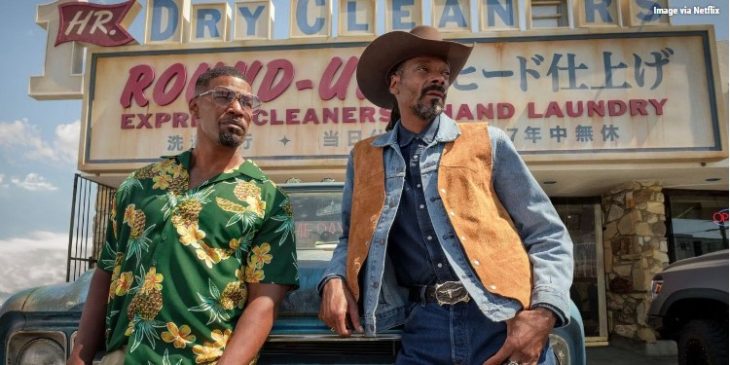 In the opening minutes of Day Shift, the directorial debut of J. J. Perry, we follow Bud Jablonski (Jamie Foxx), a pool cleaner in the San Fernando Valley who uses this business as a front for his real vampire-hunting business. Once the coast is clear, Bud abandons cleaning a dingy pool and goes inside, where he takes out two seething vampires, and then pulls their fangs out to sell on the black market. Underneath the world that we see exists an entire underground world of vampires and hunters—to the point that the hunters have created a union, and the vampires have apparently taken over the real estate market in the SFV. Unfortunately in Perry’s film, written by Tyler Tice and Shay Hatten, that hidden world largely remains hidden.

Foxx’s Bud is scraping by on the meager money he gets on these fangs, and his ex-wife Jocelyn (Meagan Good) says that her and their daughter Paige (Zion Broadnax) are going to move, if Bud can’t get the $10,000 they need to pay for Paige’s school and braces within a week. In order to meet this demand, Bud attempts to get reinstated into the vampire killing union. With the help of his old military buddy, Big John Elliott (Snoop Dogg), Bud starts working the vampire hunting day shift. But since Bud has broken the rules of the union several times, and has been previously kicked out, he’s assigned a partner, Seth (Dave Franco), who’s far more comfortable behind a desk than in the field. Bud has to earn 10 grand in a week, all while trying to stay on the up-and-up with his new partner in tow.

Perry’s film mostly focuses on the encounters and subsequent fights that Bud engages in as he tries to get enough fangs to pay for his daughter’s tuition and braces. This is where Day Shift shines, as Perry has decades of experience in the world of stunts, working on such films as Mortal Kombat, Iron Man, and Avatar. The fights in Day Shift are fast-paced and blunt, and almost always manage to feel spontaneous and brutal. These fights never come off as obviously choreographed, but rather, Bud seems as if he’s fighting for his life, and Foxx conveys that well. Within these fight sequences, there’s an incredible malleable quality to them, as these vampires can almost fold in on themselves, defy physics, and then get back up and fight as though nothing has happened.

But while these fights are often impressive to watch, it’s the elements of Day Shift that aren’t explored further that feel like a missed opportunity. For example, the entire vampire hunting union seems like a fascinating world to explore—especially if there are more employees like Snoop Dogg’s gigantic gun-toting hero, Big John. Day Shift gives us a slight glimpse at what this underworld group is like, and then never returns to that idea again. Franco’s Seth rolls off vampire facts that seem like they’ll be useful in the future, as if Day Shift is setting up a larger world ready to be explored, but again, mostly relies on these individual fights in random suburban homes.

Also fun, but not given enough screen time, is the partnership between Bud and Seth, and the stark difference between how they act in the field provides some of the film’s funniest moments. While the film seems to want to center on this dynamic at first, this partnership, unfortunately, mostly gets lost as Day Shift heads into its third act, as it transitions into more of a story of Bud trying to take out a group of vampires, led by Audrey (Karla Souza), who is also a realtor—another point of interest that is mentioned and dropped without any real importance.

That might be Day Shift’s biggest flaw, in that it shows promising directions the film could head down, but then instead, the film follows a more basic path than one would expect. Like another Netflix summer action film, The Gray Man, Day Shift feels more interested in presenting the potentials of this world for future sequels/prequels/whatever, all while the introductory film to this world heads down a fairly generic path. There’s plenty to be done within this world of vampire hunting unions, vampire realtors, this apparent underground collection of vampires, and the partnership between Bud and Seth. But again, Day Shift seems only to exist to show the possibilities of this universe, without embracing them or exploring them in any significant way.

Yet even though it never quite reaches its full potential, Day Shift is enjoyable for the aspects it does want to focus on, even though it’s hard not to wish it would investigate the larger world further. Foxx and Franco are particularly fun to watch together, and Perry shows that he’s a strong director of action sequences. If this world does decide to open up more in the future, there’s plenty to explore in the Day Shiftiverse.